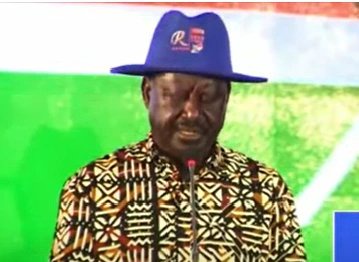 Raila Odinga has now turned down Chebukati's choice of William Ruto as the new president. Raila Odinga also said that the results don't mean anything and that the Court of Law should throw them out.

"Our opinion in Azimio is clear: Wafula Chebukati's statistics are wrong and illegal, and a court of law must throw them out." "From our point of view, neither a legal winner nor a president-elect has been declared," Raila said.

Ruto was named President-elect after he passed the "50% plus 1" constitutional threshold. The "50% plus 1" threshold means that the winner of a presidential election must get at least 50% of the votes cast and one more vote to avoid a runoff.

Odinga, a well-known leader of the opposition, ran for office for the fifth time with the help of the ruling Jubilee Party, which is led by President Uhuru Kenyatta.

Deputy Speaker Wafula Chebukati, who is in charge of the Independent Electoral and Boundaries Commission, spoke to the whole country at 6:00 p.m., three hours later than planned. He said that Ruto got 25% of the vote in twenty-four counties, which is the minimum number of counties needed to meet the threshold.

After almost six days of counting votes at the National Tallying Center of Bomas of Kenya in Nairobi, the Independent Electoral and Boundaries Commission (IEBC) said that Ruto would be the next president.

The leader of the Kenya Kwanza Alliance got more than 25% of the vote in 39 of the 47 counties.