By TheKenyasNews (self media writer) | 9 days ago 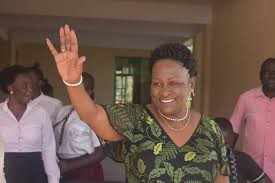 The Kakamega Women Representative Elsie Muhanda has defended her track record and accused Senator Cleophas Malalah of a vendetta to soil her name.

She said claims by the senator that her office was allocated Ksh. 140 Million under the National Government Affirmative Action Fund were false.

"Every Women Rep. in Kenya is allocated Ksh. 84 Million per financial year, out of which the National Government retains Ksh. 12 Million, which is 15 per cent, for administrative purposes," said Mrs. Muhanda.

"Roughly, we receive Ksh. 72 Million for the whole County. For instance, Kakamega has twelve sub-counties which translates to Ksh. 6 Million per sub-county," she added.

The lawmaker pointed out that some sub-counties such as Malava had seven Wards and that if they divided the Ksh. 6 Million allocated to the area then they were entitled to less than a million each.

"I am doing a lot with even these minimal allocations compared to my colleagues representing constituencies who receive more than Ksh. 130 Million each annually.

She said using the funds she had initiated a range of development initiatives such as funding of various groups to promote value addition in agriculture.

"We have two forms of funding of groups and these include 'Panda Mbegu' and 'Inua Vikundi' in value addition," she said.

Muhanda said market umbrellas was another of her programmes which supported open air market traders across the county.

She said they had also sunk boreholes across the sixty Wards in a programme aimed at ensuring access to safe, drinking water.

She said her office had trained over 200 youth with technical skills which took place at the National Industrial Training Authority.

She said they had plans to facilitate the graduates with working tools.

"Students who got good grades in the above programmes are currently in various universities continuing with their education on full scholarships from my office," she added.

Muhanda said they had sponsored the training of 600 bodaboda riders with successful ones being issued with driving licences.

She said they were also putting up houses for needy families, especially widows and the disabled, in which over 120 households had benefitted so far.

"We have provided maize and fertilizer to over 20,000 families across the county. We are also rolling out a programme to fight Gender Based Violence," said Muhanda.

She said they had also distributed sanitary pads to female learners in all public schools in the country, distributed wheelchairs to the disabled, besides funding their groups and buying them food.

"We have also contributed to emergencies and supported residents in programmes such as putting up boda boda shades, donated car wash machines for groups and we are putting up high-mast lights and sourcing electricity transformers, among others," she said.

Muhanda accused Malalah of blackmail and claimed that the senator expected financial favours from her which she declined triggering the current verbal exchanges.

Keep following us for more news and updates.

Content created and supplied by: TheKenyasNews (via Opera News )