“I Won't Deputize You, It's My Time” Kalonzo Musyoka Tells Raila Odinga As Kenyans React

By Felicis.Marshall (self media writer) | 6 days ago 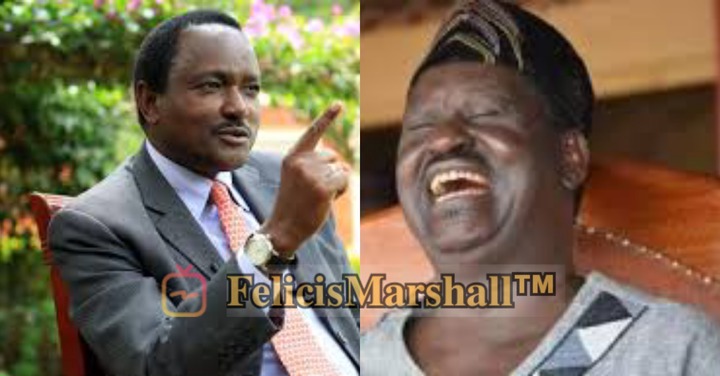 The Wiper Party leader Steven Kalonzo Musyoka has left many Kenyans talking after his latest remarks concerning the 2022 presidential elections. The former Vice President is one of the country's politicians who have already declared their interest in succeeding President Uhuru Kenyatta. Other politicians who have also made public their intentions of assuming the top state office are Deputy President William Ruto, ANC's Musalia Mudavadi, KANU party leader Gideon Moi and Governor Alfred Mutua, Wycliffe Oparanya and Ali Hassan Joho.

The Orange Democratic Movement party boss Raila Odinga is believed to be a force to reckon with in the coming presidential elections. Raila has been moving around the country in the company of state officials and army of powerful and influential politicians as he drum support for his 2022 presidential bid. This is despite not having declared his candidature yet. 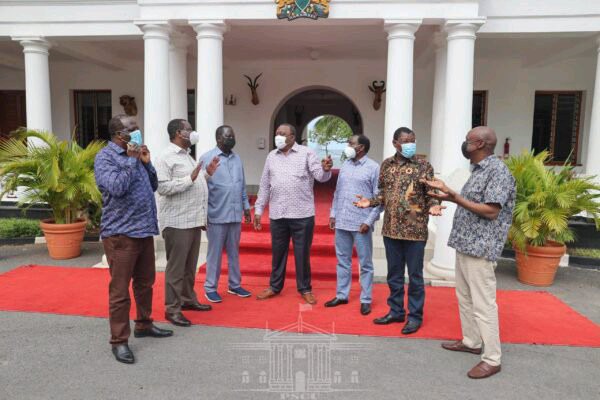 Kalonzo Musyoka, who is a member of the One Kenya Alliance (OKA), now claims that he is not ready to deputize Raila Odinga, arguing that it is time for Raila to support him. He stated that the former Prime Minister is welcomed to the OKA alliance but should not expect to be seconded by the Wiper Party leader. 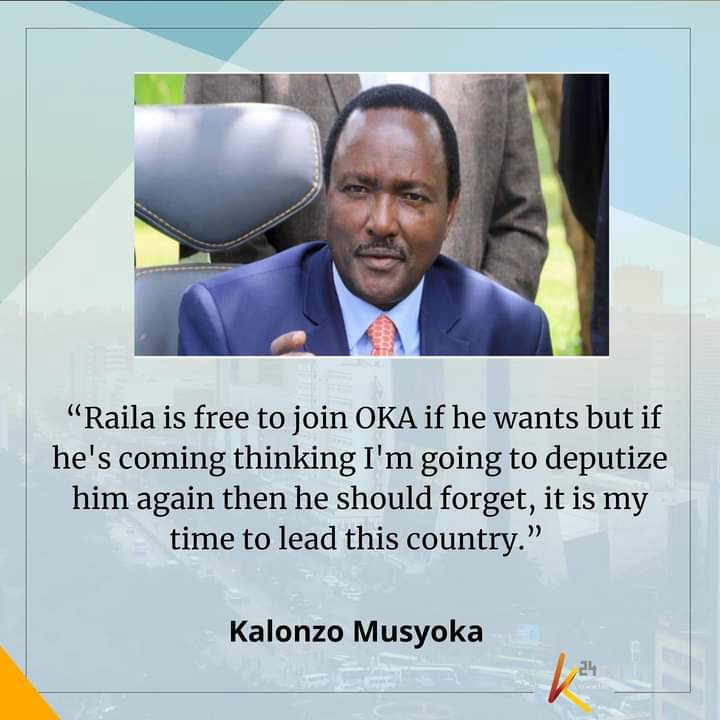 Gilbert Juma: How are you planning to become President when all you do is campaign from Kitui to Machakos and Makueni to a church on Sunday? How are you planning to become President when you need Mudavadi, Gideon, Wetangula and Jirongo to go campaign for an MCA seat in your village? Ruto and Raila are scouring, persuading masses, meeting voters across the nation and here you are still talking. And when we say there are only two horses in the race you feel bad. Get out and campaign bwana.

Jymoh Qaburu: It's just a matter of time and Kalonzo will be running to join Baba soon. The person who nick-named Kalonzo as water melon was on spot on. I like Mudavadi because he is more decisive and focused than all other OKA candidates.

Arap Ngeno: Raila all the way. Just run for the seat, it's your right but don't forget that opposition leaders don't sit in either of the houses what that means is you will be leading opposition from the other side of the fence. My worry however is that your votes may not qualify you to be the opposition leader. The person who has demonstrated seriousness in that position is William Ruto. 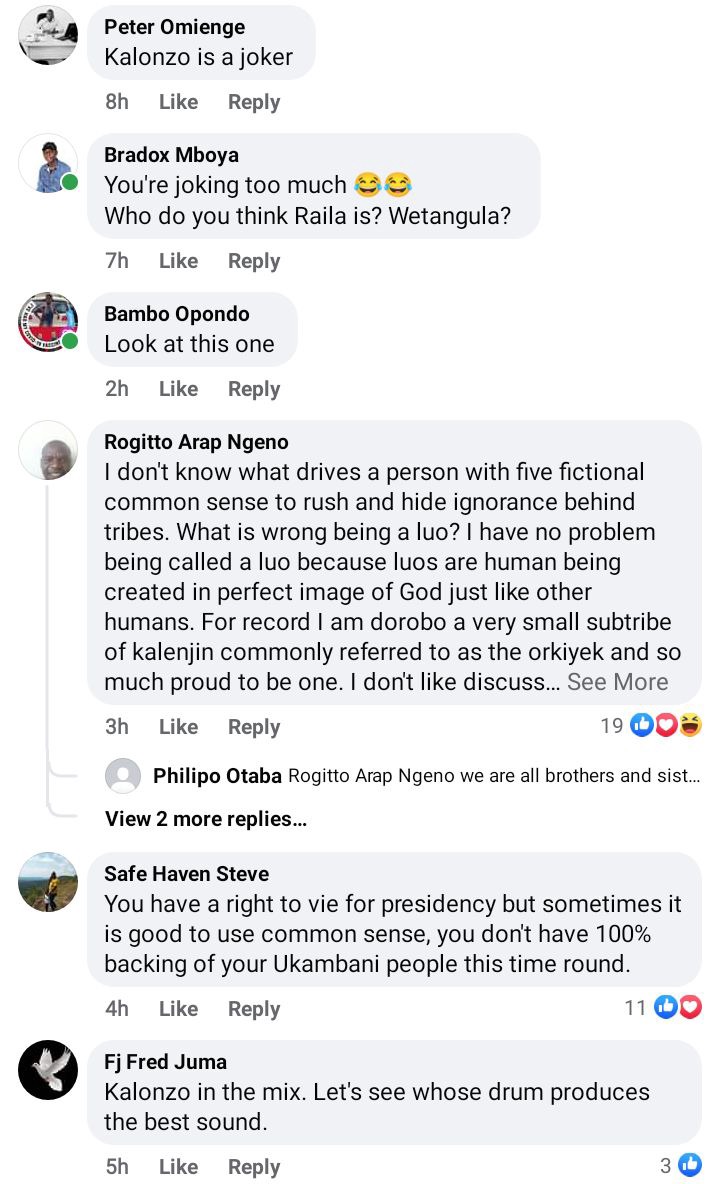 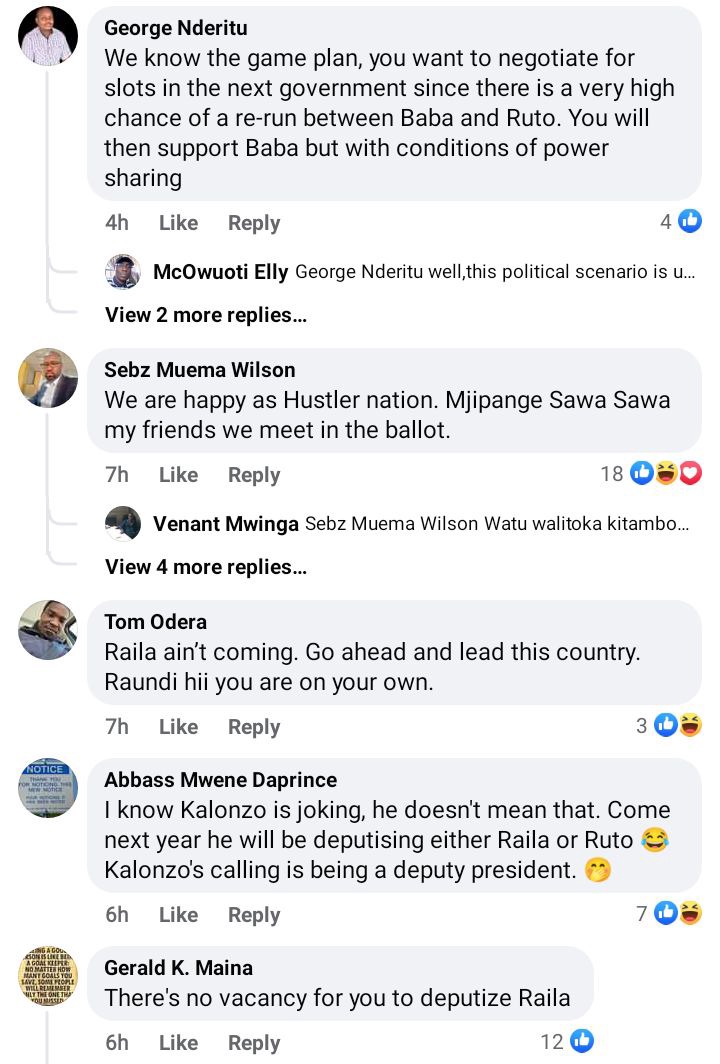 Kalonzo argues that Raila should forget being supported by him. What do you think about such remarks? Feel free to share your thoughts and opinions in the comments section below.