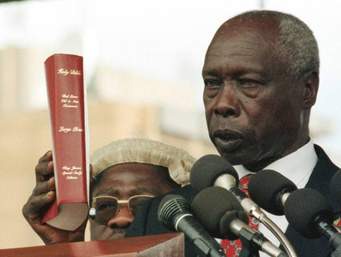 During the time of Kenyatta's presidency, Daniel Arap Moi was a toothless vice president who was highly regarded as an outsider in Kenyatta's exclusively Kikuyu inner circle.

Although Moi was legally Mungai's senior, the police commandant- like other powerful Kikuyu government officials-enjoyed humiliating Moi. Some of these instances are captured in Moi's authorized biography Moi: The Making of An African Statesman authored by Andrew Morton.

Andrew narrates an incident in 1975 when Moi returned from an OAU meeting in Kampala, only for James Mungai to accuse him of bringing guns as part of a conspiracy to oust President Kenyatta.

Mungai is said to have conducted a search for the weapons, ordering his men to search Moi's offices at the Nakuru Oil and Flour Mills. As this was not enough Morton adds that on two occasions Mungai slapped Moi in the face in front of President Kenyatta at State House Nakuru.

After Moi complained to Kenyatta the President replied by asking a rhetorical question" Who is the minister in charge of the police?"

Morton writes."Moi was a very scared man. Each night he prayed, knowing that he could have been assassinated any time. Even so, he was troubled as he was holding on to his job by the skin of his teeth,"

Shortly after Moi assumed power, Mungai took a long and rough road trip from Nakuru to Lokitaung where he fled to Sudan and later flew to exile in Switzerland. Two months later he returned to Kenya after learning that Moi was not interested in revenge. The ex-police commandant was even allowed to retire in peace.