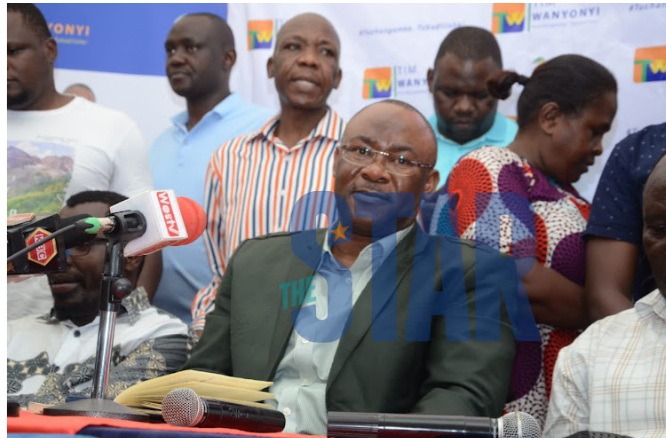 Westlands MP Tim Wanyonyi has claimed he will not stand down for any candidate who is targeting the seat of Nairobi governor under the Azimio La Umoja movement.

Wanyonyi said a clique of people "cannot sit in a room and decide that there are those who should put their ambitions aside."

"I ask those who think I could stand down for them, what do they have that I cannot offer the people of Nairobi," the ODM lawmaker posed.

On January 11, Wanyonyi called on Azimio La Umoja supporters not to sacrifice his candidacy for governor of Nairobi because of the presidential candidacy of ODM leader Raila Odinga. He said that would amount to giving Raila terms of support.

Others who have said they will run for the Nairobi seat and support Azimio La Umoja are Governor Anne Kananu, businesswoman Anne Kagure and Kenya National Chamber of Commerce and Industry President Richard Ngatia.

When launching her gubernatorial bid on Jan. 7 at Kasarani Stadium Gymnasium, Kagure said she was in the hotly contested race and was better placed to replace Kananu.

She did not declare her preferred party but said she would contest the seat through the Azimio la Umoja coalition.

Kagure has been a strong supporter of Raila's presidential candidacy.

Ngatia, on the other hand, was a close confidant of Raila after the handshake between the ODM leader and President Uhuru Kenyatta.

On Sunday, Wanyonyi said voters in Nairobi should be free to decide who will become their governor on August 9.

“We cannot allow the future of Nairobi to be decided by a few people. I told my party that I will go to the polls and that I will meet those who want to stand on the ODM in the primaries,” he added.

He asked voters to look at the manifestos of those who will contest as well as their developmental backgrounds.

“Don't go after certain positions because you come from a community that has the numbers. Go for these positions if you are keen on providing services to people,” he added.

Wanyonyi made the remarks when he met professionals from the Luhya community who support his candidacy.

Others who have expressed interest in the seat are Nairobi Senator Johnson Sakaja and former City MP Margaret Wanjiru.

In recent months, Sakaja has become a close confidant of ANC party leader Musalia Mudavadi. He has, however, not yet declared the party through which he will contest the seat.

Wanjiru has indicated that she will contest the seat of Ruto's United Democratic Alliance (UDA) party.

Happening Now: Raila Odinga Brings Misikhu Market To A Standstill As He Campaigns For His Presidency