Reasons Why DP Ruto Was Blocked From Travelling To Uganda (Opinion)

William Samoei Arap Ruto is the Second in Command after President Uhuru Kenyatta and the deputy president of the Republic of Kenya. Today the DP has has raised many eyebrows on the Social Media after he was denied his flight to Uganda.Communication secretary David Mugonyi has come out to blast the decision after he said this",When he got at the airport, he was asked to seek clearance from the Head of public service and secretary to cabinet.We are suprised because this has never happened in the last nine years." 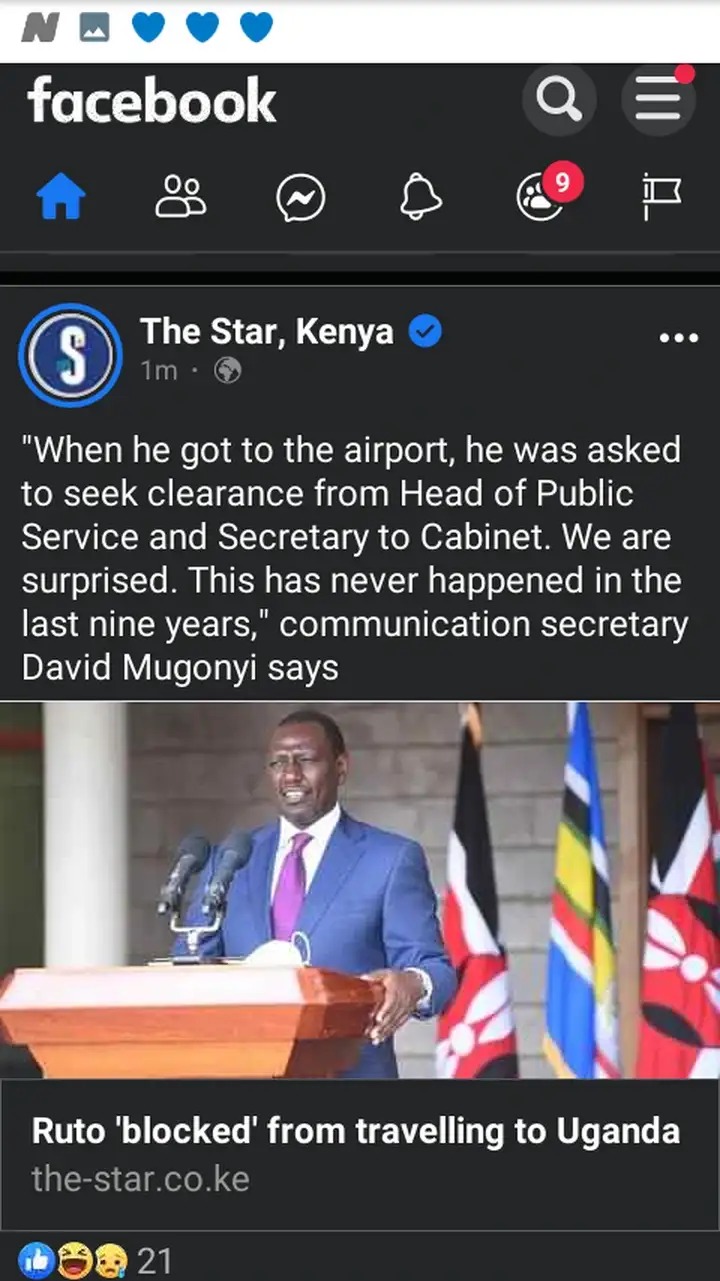 DP Ruto Ally and Lawyer SC Dennis Itumbi has accused Interior Cabinet secretary Fred Matiangi of giving the instructions.Ruto who was accompanied by Kiharu Mp Ndidi Nyoro and others on his entrorage were initially also stopped before the speaker of Parliament Justin Muturi said Members on a private visit need no clearance. 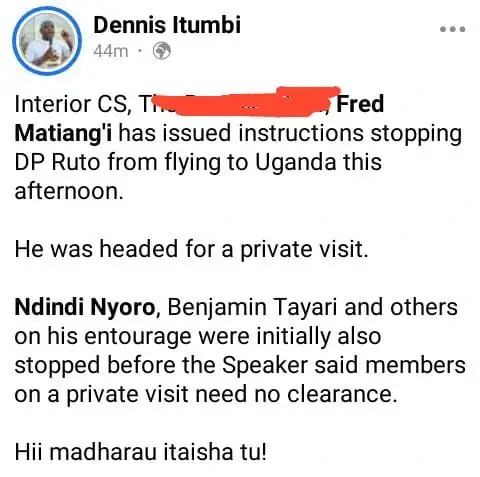 Ruto has been on tour to Uganda for Several times, meeting with Ugandan President Yoweri Kaguta Museveni.Museveni has been inviting him their for their private Matters and he even takes him around the country to his development projects.The DP has not yet said anything about incident he just tweeted on his twitter account,"Isorait...tumwachie Mungu."

According to my opinion the second in Command was denied his flight because of his fall out with President Uhuru Kenyatta and not athering to the same direction with the government.The Deputy president has been holding Political gatherings which were banned by the President due to the Covid-19 issues.The other thing is that he did not have a permit Clearance from the government to allow him fly outside the country.Senator Kipchumba Murkomen has also come out to reveal why Ruto was blocked from having his flight by saying that it's because of his major differences with President Uhuru. 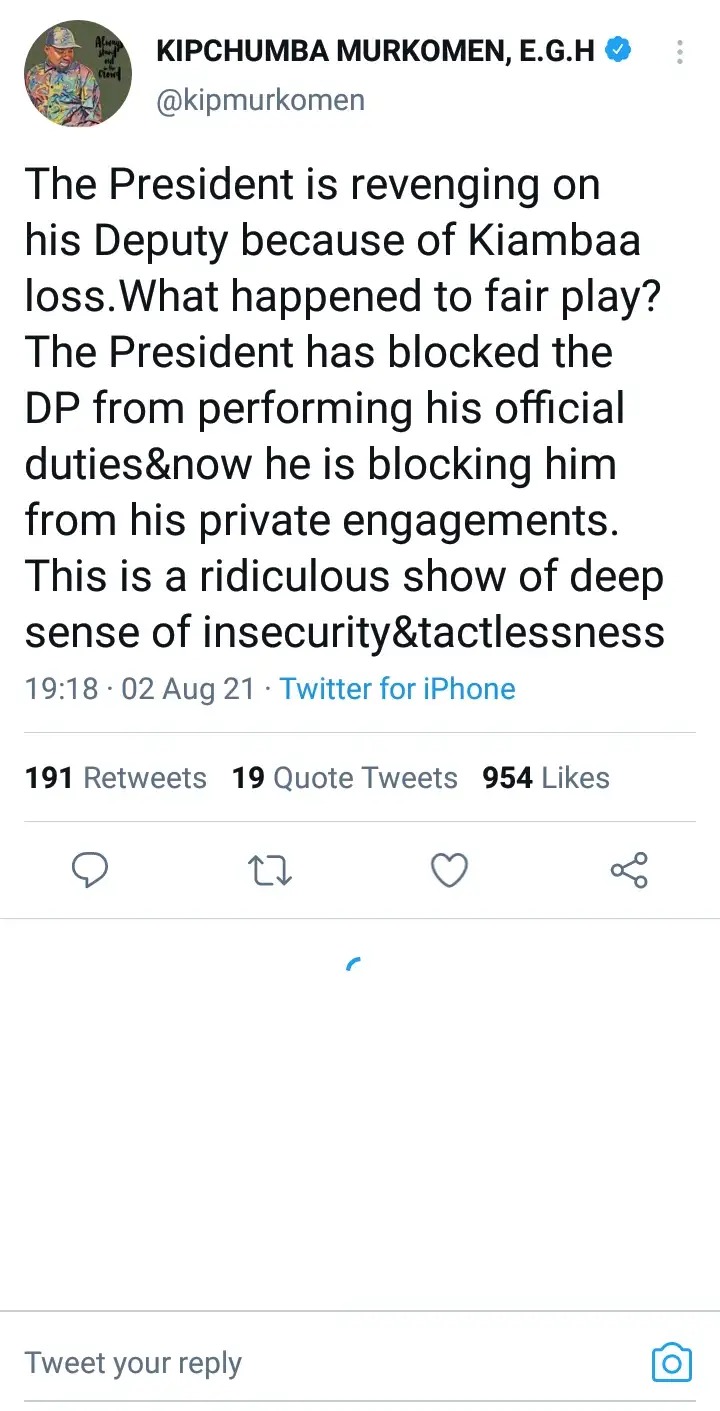 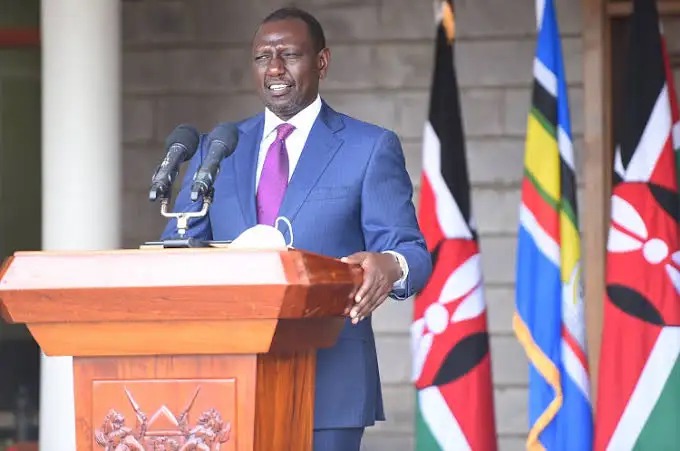 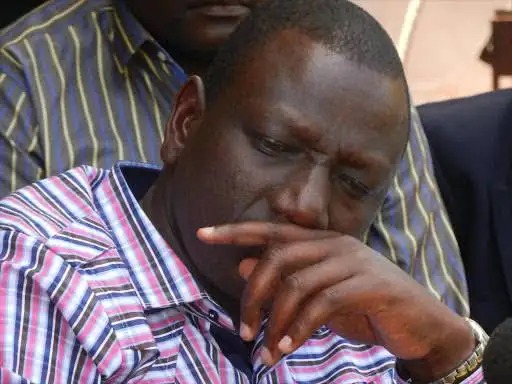 "Give Us A break," Cate Waruguru Boldly Lectures Martha Karua And Other Mt Kenya Leaders[Details]

Have You Recieved Your Huduma Card? Do the Following To Know If It's Status

Do You Need A Marriage Certificate In Kenya? Do The Following To Get It

Will The National Assembly Save Us? House Invites Memorandums Amid Public Outcry Over Fuel Prices