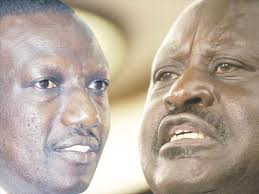 The deputy president William Ruto is keen on making his first stab at the presidency in August 2022 when kenyans will be going to the polls.

Ruto however faces stiff competition from the ODM leader Raila Odinga who will this week of Friday announce his bid to run for the highest Office in the land.

Having fallen out with the president whom he Supportted in 2013 and 2017, Ruto has been Crisscrossing the country marketing his bottom up economic Model.

On Wednesday, he will be visiting kisii County which is believed to be Raila Odinga's political backyard as reported by KTN.

Ruto's visit comes a few weeks after over 1000 UDA Members defected to ODM putting a dent on his influence in the region.

The DP is therefore expected to reverse the huge gains made by the orange democratic party in the region.

In another trending news this evening, the Killer Corp who Killed six People on Tuesday Morning in Kabete is said to have made a call to his cousin after Killing his lover.

Afterwards, he went on to shoot five more people before turning a gun to himself. It's reported that the constable had had an argument with his lover before he committed the heineous act.

Love triangle and Investigations that have been going on over a case where the Corp's gun was found to have been used in killing a young man are suspected to have forced him to take his life. 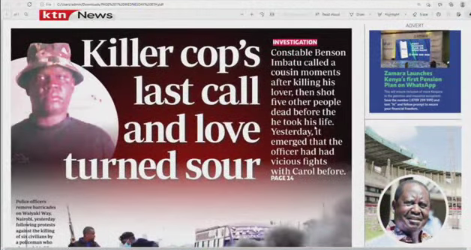 "Ni Kubaya" President Uhuru Did Not Push The BBI Drive-Lawyers