As Reported by a local publication, a vocal senator from Ruto's North Rift region who readily defends him on social media pages has panicked and has since retreated to the village after his governor declared interest in his seat.

However, as we have been closely following the political unfolding in the country, it is Elgeyo Marakwet county governor Alex Tolgos who recently declared Interest in Kipchumba Murkomen's seat. The second term governor who is a supporter of the Orange Democratic Movement party boss Raila Odinga declared that he will be on the ballot on the Azimio La Umoja ticket, a move that has since scared senator Murkomen, he is said to be in the village fully, a different approach from before when he stayed in Nairobi.

Tolgos being the incumbent governor, he fully understands the ground a move that must be scaring Murkomen.

Murkomen being Ruto ally, had an upper hand in defending his seat however, with the entry of a tough competitor he must now fully campaign. 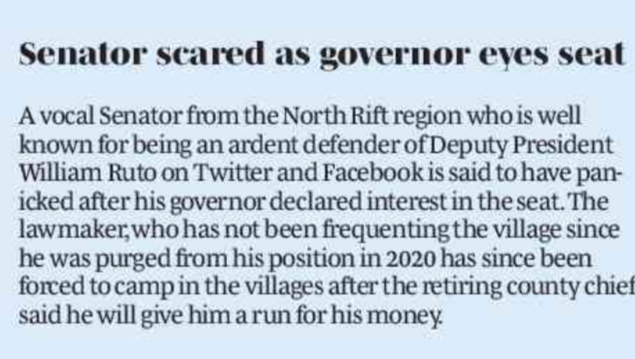