By Matha.wendo (self media writer) | 5 months ago

The Ethics and Anti-Corruption Commission (EACC) boss Twalib Mbarak has broken his silence on his relationship with the Director of Public Prosecutions (DPP), Noordin Haji, after speculations that the two were not seeing eye to eye.

While appearing on a TV interview alongside Haji on Thursday, December 2, Mbarak insisted that there were no differences between them adding that they were family friends.

The EACC boss went ahead to disclose that they have a cordial relationship and have never had any differences that have affected service delivery to Kenyans.

"First of all, I am smiling because I do not know if I have ever collided with the DPP. Maybe the public does not know that he is a family friend," he stated.

Mbarak also revealed that their cordial relationship has enabled both agencies to carry out joint investigations on big graft cases. He added that he has even grown fond of the DPP's staff.

"When I came in, most of the big file because the public does not know this due to in-house management, my investigators and the prosecutors do a joint evaluation of the files.

"Like now when I walk to the DPP's office I will see a staff and address them with their first name because I have seen them during the brainstorming of a file," the EACC boss stated.

However, he explained that differences often arise during the investigation process adding that it was good for the agencies.

“When you say of friction, there will always be a conflict in something. You find that investigators, prosecutors will always have a grey area where they will collide and it is allowed.

Additionally, Mbarak affirmed the agency’s commitment to prosecuting government officials for graft adding that all the county governments are currently under investigation. However, he stated that some of the governors were accountable and some of the cases were as a result of blackmail.

“I will say all counties are under investigation. Right now we have charged around nine governors. There are two more that are likely to be dumped into the frying pan,

“There is also an element of blackmail. We have some governors who are very accountable but they are blackmailed by the Members of County Assemblies. You know the famous Makueni issue in the first term of Kivutha Kibwana,” he disclosed. 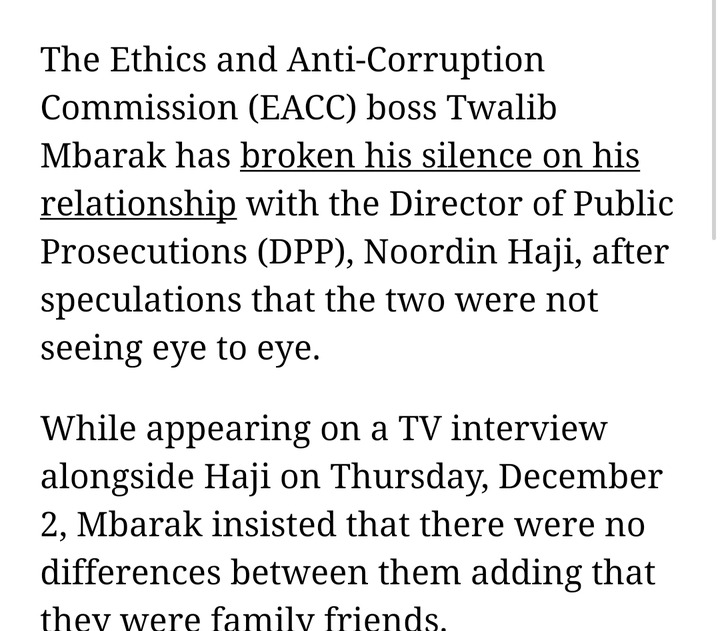