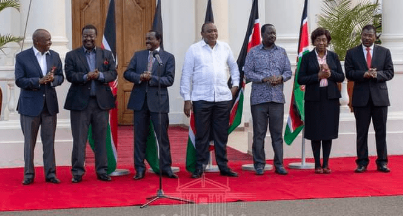 President Uhuru Kenyatta is reportedly crafting his succession plan behind the scenes, with several insiders stating that the recent political activities involving Mount Kenya Region has been initiated by the region's kingpin.

Uhuru who was few months ago seen to be fronting the former Prime Minister Raila Odinga is alleged to the mastermind behind Raila's three day tour in Mount Kenya and Tuesday's meeting at Safari Park that brought influential people and leaders from the vote rich region.

According to a report by the Standard, Kenyatta instructed his allies from the region to scrutinize five presidential aspirants (ranging from Raila and the four OKA leaders) exclusive of the Deputy President William Ruto, and forward a report to his office during a retreat that will take place at the State House two weeks from Friday (when the Mt Kenya Foundation with meet the OKA team).

The Mt Kenya Foundation Chairman Titus Ibui yesterday revealed that the president tasked them with identifying a leader who will not only have the interests of the region at heart, but will also safeguard his legacy.

The leaders who attended yesterday's luncheon that lasted more than five hours seemed to back up Raila for the top seat. 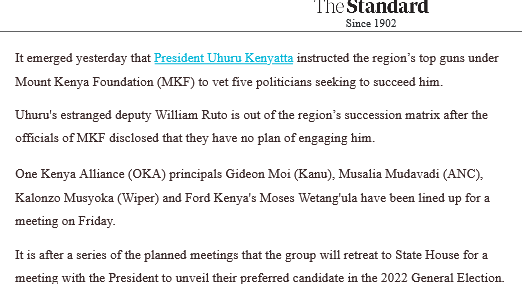