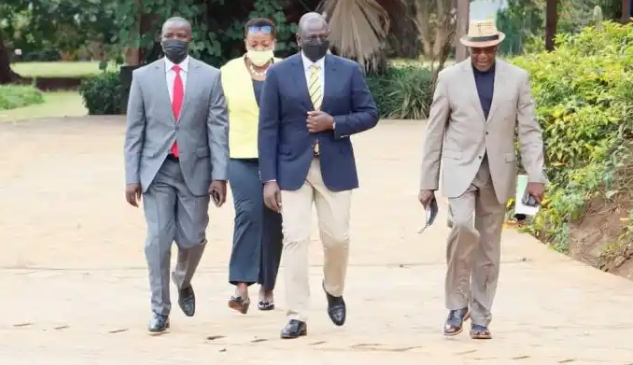 Tarus, who served as Kenya’s High Commissioner to Australia between 2009 and 2012 during former President Mwai Kibaki’s government, accused Ruto of killing the region’s economy.

“First of all, I would like to thank the right Honorable Prime Minister for finding this rare opportunity to meet the oppressed people of Rift Valley,” he stated.

He maintained that DP Ruto has killed the region’s economy by refusing to pay farmers and taking money from cereals.

“I am stating the oppressed people, without fear, without doubt, because when you kill a people’s economy, you have only one interest, to oppress them.

“When you refuse to pay farmers and you take all the money from cereals, you have only one objective; to kill them,” he asserted.

He further faulted the DP for selectively appointing people in government and destroying careers of great men and women in the region such as former Minister of Agriculture Dr. Sally Kosgei, former parliamentarian, and Kenya’s High Commissioner to South Africa, among other leaders.

“When you selectively appoint people in government and destroy careers of great men and women, and I have in mind people like Sally Kosgei who is supposed to be serving in government as at now,” he stated.

He termed DP Ruto’s party as one that attracts eaters and expressed his confidence in ODM as one that reforms.

“That is a party if you check carefully; why is it only attracting eaters?

“People whom when they go to any ministry they only eat, they don’t develop, and here you see where the right honorable Prime Minister, it is only attracting reformers,” he added.