Musalia Mudavadi Holds A Consultative Meeting With This Group Of Businesspersons.

By WiseBoy_InfoNews (self media writer) | 1 month ago

My dear reader, as you enjoy your reading, please make an initiative of following me for more of this. 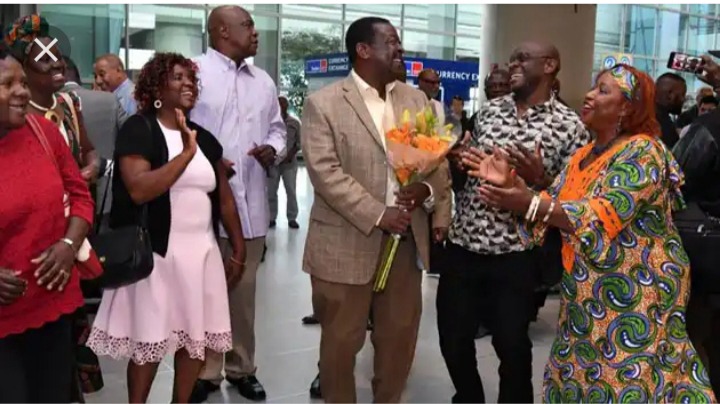 As tweeted by his Amani National Congress party yesterday, Mudavadi held a consultative meeting with Eastleigh Business Owners at the Musalia Mudavadi Centre. They discussed a bunch of issues that intend to promote a conducive business environment and ways to boost the industry.

' Eastleigh Business Owners, today held a consultative meeting with the party leader at the MM centre where they discussed a raft of salient issues that intend to promote a conducive business environment and ways to boost the industry,' read the post.

The party had earlier tweeted about some of the strategies Mudavadi will use to improve the economy. The strategies include lowering taxes, creating jobs and strengthening the Judiciary.

' Lowering taxes, creating jobs and strengthening the Judiciary will save our country.' read the post.

On Wednesday, the Amani National Congress chief held an interview with Radio Maisha in its morning show hosted by Emmanuel Mwashumbe and Shugaboy. In the interview conducted Mwashumbe, Mudavadi touched on various issues among them the ongoing call for disbandment of the Independent Elections and Boundaries Commission by Orange Democratic Movement (ODM) party, and the fight against corruption.

Mudavadi called on all Kenyans to work with the electoral commission for the country to have a credible election. He added that the electoral body should be facilitated financially for it to carry out its mandate effectively.

" For credible elections, as Kenyans we have no alternative but to work with the IEBC. The commission should be facilitated financially for it to be able to carry out its mandate, for credible elections next year," the One Kenya Alliance principal said.

Mudavadi appeared to be insisting on funding government institutions and commissions sufficiently inorder for them to perform well in their duties. This is after he attributed the ineffective fight against corruption to lack of enough funding to the Judiciary and other agencies that aid in fighting against corruption.

" For us to effectively fight corruption and prosecute graft cases in time, we must sufficiently fund our Judiciary and other agencies that aid the fight against this monster that is derailing our economic growth," he added.

Mudavadi has been making tours both in the media houses and around the country. On Sunday he was in Kiambu County where he attended a church service in which Gatundu South Member of Parliament Moses Kuria and Kiambu governor James Nyoro also attended. On Tuesday however, Musalia Mudavadi attended a burial ceremony in Nandi County in which the Nandi County governor, Governor Stephen Sang, also attended the burial.

The burial ceremony was for Mama Ezinah Kaluhi Swadi, the late wife of Hon. Jackson Swadi, Amani National Congress Member of County Assembly for Kibwaregi ward, Nandi. Governor Sang urged Mudavadi to leave Odinga alone saying they(Ruto's camp) also tried to push him to the presidency in 2007, something which proved impossible thus they surrendered, deserted him in 2013 and moved to another camp(forged an alliance with Uhuru). The outspoken governor urged the Amani National Congress (ANC) party boss to shun the statehouse and boardroom political meetings and, just like Ruto, go to the commonman to seek their votes.

Musalia Mudavadi however, tactically and soberly responded to the challenge by the governor saying that in the said statehouse meetings no one was being forced to rally behind anyone in his presidential bid. He urged mourners present and Kenyans at large to interrogate leaders before voting for them. He stated that politics of deceptiveness and fear has no space in the country.

On Sunday, Mudavadi attended a service in AIPCK church in Githunguri, Kiambu County. In his speech to the congregants, the former Deputy Prime minister called on leaders to respect the Independent Elections and Boundaries Commission. Gatundu Member of Parliament Moses Kuria, who agreed with Musalia's sentiments, on the other hand welcomed Musalia to Kiambu telling him to familiarize with residents. He also urged him to shun from the statehouse visits saying it will not add any value to his presidential bid. Kiambu governor Hon. James Nyoro on the other hand said that the former Finance Minister is the only antidote to Kenya's problems. He said he is the only one capable of fixing the country's debt crisis.

Musalia has finally hit the ground as many of you urged him, will he make it to statehouse! Drop your views an the comment section below.

List Of 15 Counties To Watch In The 2022 Presidential Election's.