By Itsonlyme | self meida writer
Published 4 days ago - 0 views

The former prime Minister of Kenya and orange democratic party leader honorable Raila Amollo Odinga has finally opened up after the passing of the building bridges initiative where the project has reportedly surpassed the threshold meant for the next step. 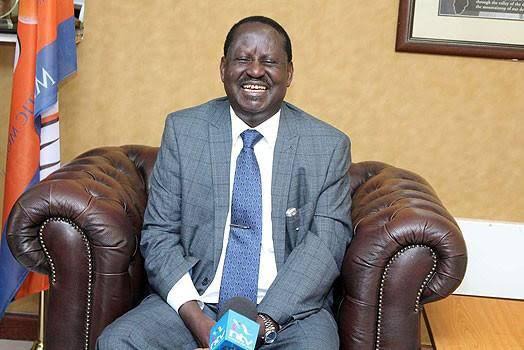 Taking to his twitter account to express happiness and excitement, the former prime Minister of Kenya first revealed what he was doing during the day as different members of county assemblies were debating on whether or not they should pass the building bridges initiative.

The orange democratic party leader first revealed that he had attended a meeting in Kisumu where he met Governor Anyang Nyongo and a couple of other leaders from Egypt where they discussed matters to do with the energy sector in Kenya.

This was followed by a dramatic tweet after the former prime Minister uploaded a caption on his twitter account where he posted a thumbs up emoji followed by a fist which indicated that he was satisfied with the outcome.

His post has however sparked alot of mixed reactions from Kenyans who seemed to have been confused on what was going to be his next move and how he got most of this counties to pass the building bridges initiative.

With a section of Kenyans claiming that the former prime Minister of Kenya was going to improve the lives of Kenyans through the building bridges initiative due to his knowledge in politics, others went ahead urged him to reveal his next plan after his Victory so that Kenyans can know what to expect.

Kenya Kenyans ODM Raila Odinga Super
Opera News is a free to use platform and the views and opinions expressed herein are solely those of the author and do not represent, reflect or express the views of Opera News. Any/all written content and images displayed are provided by the blogger/author, appear herein as submitted by the blogger/author and are unedited by Opera News. Opera News does not consent to nor does it condone the posting of any content that violates the rights (including the copyrights) of any third party, nor content that may malign, inter alia, any religion, ethnic group, organization, gender, company, or individual. Opera News furthermore does not condone the use of our platform for the purposes encouraging/endorsing hate speech, violation of human rights and/or utterances of a defamatory nature. If the content contained herein violates any of your rights, including those of copyright, and/or violates any the above mentioned factors, you are requested to immediately notify us using via the following email address operanews-external(at)opera.com and/or report the article using the available reporting functionality built into our Platform