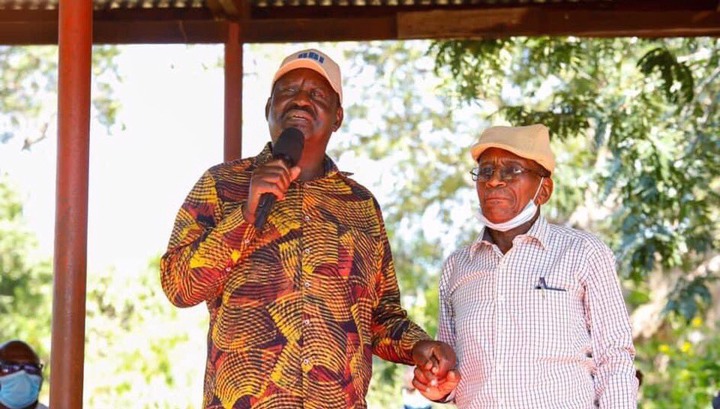 Orange Democratic Movement (ODM) Party leader Raila Odinga has been in Taita Taveta for a two-day meeting with the residents in this area.

Raila, who touched down in Taita Taveta on March 1st, 2021, has so far met various people whom he had talks with concerning the well being of the County and the country as a whole.

However, he met someone whom he introduced to the world as a prison guard who made sure he had a great life while serving his sentence at the Manyani maximum prison.

Raila, in 1982 got accused of plotting to overthrown then President Daniel Arap Moi's government. He got imprisoned without trial and had to serve a term of six (6) years at the feared maximum prison.

Today, he met mzee John Mwavuda who was a prison guard while at the prison.

"Today in Mbololo, I had the great fortune of meeting Mzee John Mwavuda, my prison guard during my detention period in Manyani maximum prison. John was a special man, kind enough to smuggle in pieces of toilet and scrap paper that I would then write letters to my loved ones on," said Raila Odinga.

According to Raila Mzee John Mwavuda risked all his life to make sure that he had communications with the outside world while in prison.

He has now assured that he will support a project which he talked with Mzee John Mwavuda until its completion.

"Mzee John Mwavuda is a person I’ll be forever indebted to and I will support a project that is close to his heart that he has told me about to fruition. He has now lost most of his close family and let us all pray for strength and comfort for him. Hongera Shujaa Mzee John Mwavuda," pointed out Raila Odinga.