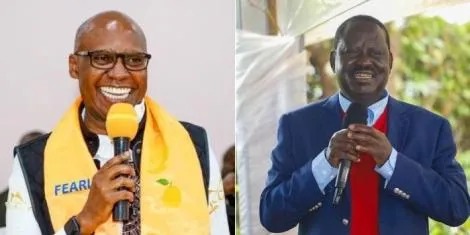 After months of loudly criticizing former Prime Minister Raila Odinga, businessman Jimi Wanjigi has opened out about his relationship with him.

Despite being Raila's major competitor for the party's presidential ticket, the billionaire turned politician declared to journalists on Sunday, December 5 that they were still good friends.However, the business magnate insisted that he was more qualified to represent the party in the 2022 General Elections, claiming that Raila was a national hero.

"Raila is a good friend of mine, and I hold him in high regard. It's something I've said before, and it's something I'll say again. He is a hero of the second liberation, and it is to him that we owe our democratic space."If he decides to run, we are rivals; the best candidate should win," Wanjigi said.

When asked if he would attend the ODM leader's presidential bid announcement on December 10 in Kasarani, the presidential hopeful said he had not been invited."I haven't received an invitation." It's not an ODM issue, therefore I'm not sure what it is. He revealed, "I heard it's Azimio la Umoja, and I haven't been a part of it."

In addition, he stated that if the party decides to give Raila a straight ticket, he will search for other possibilities."It will be more harmful to my opponent than to me." There are people that support my candidacy, and we'll figure out how to proceed from there."I believe in ODM, I like the party a lot, and I'm hopeful that it will stick to its founding principles," he said.

Wanjigi also stated that he will collaborate with other like-minded figures, including Wiper party leader Kalonzo Musyoka, in order to build a political alliance ahead of the 2022 elections."Steve is a great friend of mine. We have a lengthy relationship. We will join forces with like-minded individuals from across the country, particularly those who recognize the importance of economic liberation for the country," he remarked.

On Sunday, November 28, while attending a gathering with the Wiper party leader, Kalonzo stated that if he does not get the ODM presidential party ticket, he is open to collaborating with the billionaire.