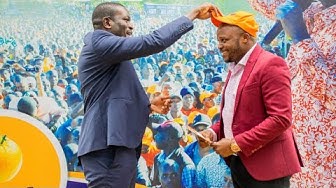 The long time comedian alias Jalas has now officially began his 2022 general election campaign in style.He has officially began interactive discussions on the ground a few days after holding a delegates meeting in his home.

Jalango is a well known comedian who have served the industry for a long time.He has also served in various radio stations and has now resolved to put his best foot forward in politics.

He has acted upon his declaration that he will be Langatta mp come 2022 general elections.He noted with keen interest that his key agenda will be the youth.He was also keen to note that for a long time politicians have lied to the youth whereas unemployment has affected the youth every five years.

He has promised that youth related projects will be his number one priority.He has the issues of young people in his agenda and promised to revive their financial capability.

He was speaking after meeting with residents and offering construction materials to rebuild their vandalized property.He carefully inspected the area of scene promising the residents that justice will be served.

The pain of loosing homes by the residents is what prompted the famous comedian to rush to their rescue.Jalango has also categorically stated that he was going to vie on orange democratic party of Kenya ticket.He keenly noted that time has now come for fresh leadership to take over and take Kenya forward.

He assured the residents that their grievances were dear to him and he would constantly visit them to learn of their progress.It is now crystal clear that Jalango will be in the ballot vying for Langata parliamentary seat.

He also urged the residents to ensure that they keep trying as luck is not an option.He was keen to emphasize on the need to work hard to reap success.