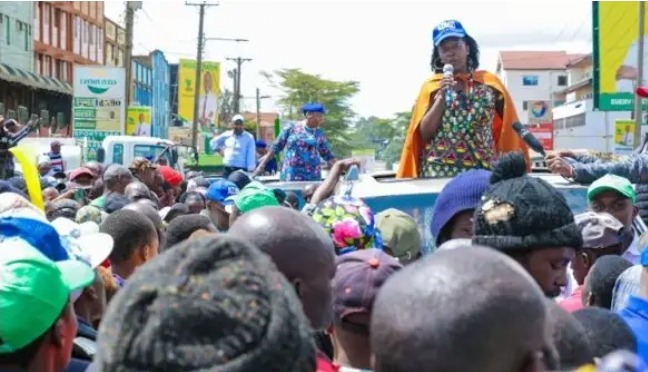 According to credible sources, the Narc-Kenya Boss is being welcomed by incumbent Governor Ndiritu Muriithi, Laikipia North Parliamentary candidates Sarah Korere and Matthew Lempurkel, and former reformed Mungiki Sect Leader Maina Njenga. The Iron Lady has been actively campaigning in the Mt Kenya region since being nominated as Raila Odinga's running partner. Top contenders Kenya Kwanza and Azimio la Umoja are fighting for votes in the Mt Kenya Region.

Transport by Chopper Martha Karua has arrived in Laikipia County, where she will organize several Rallies. The chopper carrying the leader was escorted by another chopper.

Martha Karua will tour Laikipia County in support of Azimio la Umoja's campaign for the next government formation. Martha Karua has increased her campaigning in the Mt Kenya Region, pushing Kenyans to vote for Raila Odinga in the presidential election. Martha Karua has successfully re-energized the Azimio campaign in Mount Kenya, instilling confidence in candidates associated with Raila Odinga's camp to the point where they are now designing posters with photos of their Captain Raila Odinga.

To combat the growing wave in the Mountain That Has Embraced Karua, Ruto's team is keeping a close eye on the Narc Kenya leader. One week after being nominated, she traveled to Meru, Kirinyaga, Nyandarua, Tharaka Nithi, Muranga, Nyeri, and Kiambu. DP held a series of Economic Forums and Forays in Uhuru's backyard a few days later to undo all of Karua's achievements.

Azimio DP Nominee has just arrived in Laikipia for a series of engagement Town Hall sessions before heading out on the campaign road in what analysts describe as a move to persuade GEMA Nation to support the former Prime Minister’s presidential bid.

The struggle for Mt Kenya has come down to Martha Karua and Rigathi, according to Jubilee Vice Chair David Murathe.