Is Ledama Olekina's Close Association With Ruto's Allies A Signal That He Is Changing Sides?

By MASKANI_NEWS | self meida writer
Published 21 days ago - 257 views 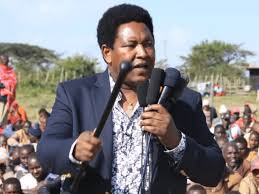 Vocal Legislator from the Maasai community Ledama Olekina who is also the Narok senator together with former Machakos senator Johnston Muthama were denied entry to Gigiri police station where Sonko is currently held. The two had gone to visit the embattled leader following his arrest this past week.

His visit has raised eyebrows with many questioning why the visit and yet his party ODM has not issued a statement on the matter touching to the former governors case which is before court. In recent days Ledama has been seen to de-touch himself from the party.

Just the other day he claimed that he is opposed to the BBI which is an initiative of President Uhuru Kenyatta and former Prime Minister Raila Odinga. Ledama is currently eyeing the Narok gubernatorial seat although political pundits are not sure which party he will use.

Impeached Nairobi governor Mike Mbuvi Sonko is currently held at Gigiri police cells as he awaits a bail hearing of his case in which he is accused of terror related offences. Several leaders who have seek audience with Sonko had earlier on denied access to him.

Ledama Olekina Mike Mbuvi Sonko Nairobi Narok Ruto
Opera News is a free to use platform and the views and opinions expressed herein are solely those of the author and do not represent, reflect or express the views of Opera News. Any/all written content and images displayed are provided by the blogger/author, appear herein as submitted by the blogger/author and are unedited by Opera News. Opera News does not consent to nor does it condone the posting of any content that violates the rights (including the copyrights) of any third party, nor content that may malign, inter alia, any religion, ethnic group, organization, gender, company, or individual. Opera News furthermore does not condone the use of our platform for the purposes encouraging/endorsing hate speech, violation of human rights and/or utterances of a defamatory nature. If the content contained herein violates any of your rights, including those of copyright, and/or violates any the above mentioned factors, you are requested to immediately notify us using via the following email address operanews-external(at)opera.com and/or report the article using the available reporting functionality built into our Platform