The Azimio factor in the governorship race in Nakuru

By Salaton (self media writer) | 3 months ago 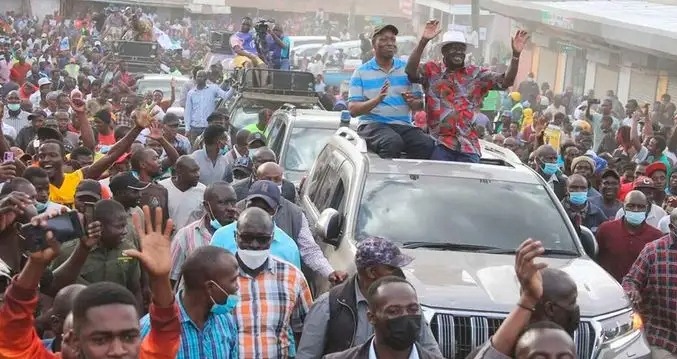 Raila Odinga, the head of the ODM, may not have been popular in Nakuru County during the 2013 and 2017 elections, but he now appears to be gaining popularity.

Mr Odinga founded his Azimio la Umoja party in Nakuru in August, following in the footsteps of President Uhuru Kenyatta, whose TNA and William Ruto's URP merged to form the Jubilee coalition that carried them to office in 2013.

Since launching Azimio, Mr Odinga has been changing the political landscape. The county has reached a fork in the road, with the two major populations no longer following the same political script as in two recent polls.

When you allow a political bigwig like Mr Odinga to enter the Jubilee bedroom... it means a major political paradigm shift is likely to happen and the political landscape in the rainbow county might never be the same again after August 9,” Mr George Omondi, a political analyst said.

This Azimio factor, pundits believe, could also sway the outcome of the gubernatorial race in the county that’s still regarded as a Jubilee stronghold.

According to the Independent Electoral and Boundaries Commission, 58 percent of Nakuru voters belong to the Kikuyu ethnic group, while 24 percent are Kalenjin and 18 percent are from other groups.

Content created and supplied by: Salaton (via Opera News )