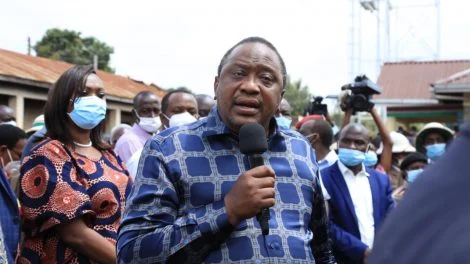 As much worries emerge in Jubilee camp with fear of losing the third by-election after having lost the Bonchari and Juja seats to ODM of Raila Odinga and PEP of Moses Kuria.

More specifically, the higher tension and fear killing Uhuru and his soldiers is the likely possibility of losing the Kiambaa seat, right from his political backyard, to DP Ruto's candidate or any candidate allied to the Deputy President William Ruto.

For that reason, his team has worked tirelessly to a point of coming with one strong and somehow popular candidate to contest for the vacant Kiambaa seat in the coming by-election.

This has come to the attention of many through the expose which has just been made by DP Ruto ally Dennis Itumbi. 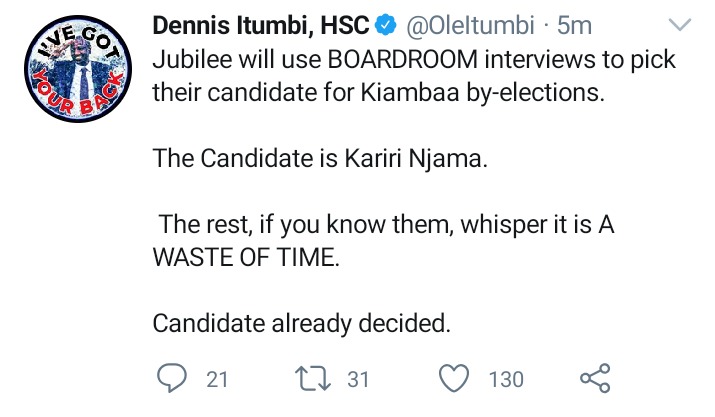 According to Itumbi who has never missed it in exposing these kinds of news, the expected candidate chosen by Uhuru's team to contest for the Kiambaa seat is Kariri Njama.

It is being said that Kariri Njama is very popular in the Kiambaa constituency and his presence in that race with the Jubilee party ticket is more likely to save Uhuru from another shame since his popularity is likely to win him that seat with the support of Jubilee.

Before this move, we have had rumors emerging out from various news sources that the main reason behind Uhuru's candidate losing these elections is because they fail to install a popular candidate to contest in those by-elections.