By miharbi (self media writer) | 10 days ago 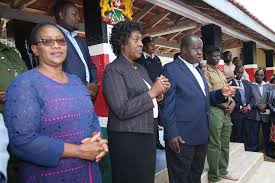 President Uhuru Kenyatta is set to retire as he is serving his last term in office. The 2010 Kenyan Constitution allows one to serve for a maximum of two terms only. President Uhuru Kenyatta was elected during the 2013 general elections and re-elected again during the 2017 general elections in both occasions defeating the Orange Democratic Movement party leader Hon Raila Amolo Odinga.

But President Uhuru is set for a big blow after the latest revelation about Cabinet Secretary Mutahi Kagwe. According to a tweet by Gabriel Oguda, Mutahi Kagwe is set to run for presidency through Kitui County Governor Charity Kaluki Ngilu's Party NARC. He aims that CS Kagwe has already set up his presidential campaign Secretariat.

"Your favorite Health Minister already setup his Presidential Campaign Secretariat, and will be vying on NARC ticket. NARC Party Leader is Kitui Governor Charity Ngilu. You're kindly asked to consult your favorite political analyst to help you with their political science notes." Tweeted by Gabriel Oguda 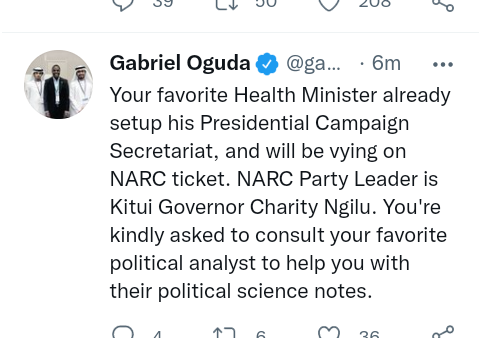