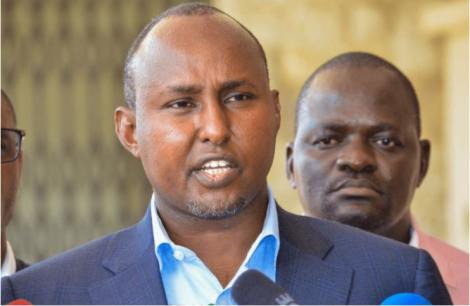 Suna East Member of Parliament, Junet Mohamed, on Monday, October 25, explained what he meant when he said that ODM leader Raila Odinga's government would be centred in his Nyanza backyard.

In an interview, Junet stated that his sentiments were blown out of context, misinterpreted, misreported and misdirected.

Junet claimed that the Tanga Tanga faction (leaders allied to Deputy President William Ruto) were using his sentiments to cause a rift between him and the Mt Kenya people.

"We were in Nyamira for a function which is Gusii land. I was basically addressing the local people of Kisii telling them that as people of Nyanza, we have an opportunity to lead the country."

"I was so shocked when I saw how people can be so desperate especially the Tanga Tanga people who might have a bankruptcy of ideas," Junet stated.

Leaders from across the divide faulted Junet for his sentiments with some members of the ODM party calling for his resignation while others said he should retract and apologise.

"I was trying to excite the people, tell them that we need to be together this time so that our numbers can be formidable as Nyanza. I was speaking in Gusii land, not even in Luoland," he added.

During the function that had been attended by Health CS Mutahi Kagwe and his Interior counterpart, Fred Matiang'i, Junet stated that Mt Kenya people had enjoyed wielding power for more than 20 years and it was now Nyanza's turn.

Following Junet's explanation, some leaders argued that he had justified his sentiments rather than apologise.

"Misreported, misquoted. Junet should simply apologise. Don’t use others to excuse your running mouth exposing your deep held disdain for others," Kikuyu MP, Kimani Ichungwa, stated