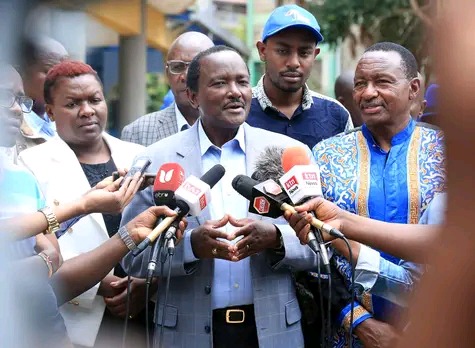 Kenyans have finally been told why Wiper leader Kalonzo Musyoka does not seem to be staying in the union for too long.

The former deputy president is known for his habit of moving from one camp to another and saying one thing and another, which has led to him being appointed as a watermelon by his political colleagues.

Political analyst Macharia Munene says there is a reason for this, something that comes from within politicians.

He thinks the leader is politically insecure and visually impaired, so he will leave immediately if he thinks things are not going well for him, due to his lack of patience and inability to see far.

"Political differences lead to frustration when things do not go the way they expected. Changing poles in a very short period of time gives the impression that a person is insecure, and should not be trusted," he told The Standard.

He added that Kalonzo's condition sometimes led him to make ridiculous and sensible decisions like the one he made yesterday when he announced that he would also run for President Uhuru Kenyatta's presidency.

The analyst said Kalonzo had no choice but to hold on to his promise to run for president, when his failure to do so would be politically motivated and he would not be able to return.

He is of the opinion that the people of Kenya are ready to leave him altogether if he again gives them a sign of indecision; by leaving the top race, just as he admits he will not win.

"He still has almost the same chance of winning the presidency, which he knows.

Kalonzo made the announcement shortly after at Azimio La Umoja. Earlier, he had threatened to run for President with an OKA ticket, before joining Azimio and authorizing Raila Odinga for the presidency.