Justice Chitembwe Breaks Down During the Ongoing Interview For Chief Justice

By MinAda (self meida writer) | 1 months

After former chief justice David Maraga retired from that position, the office was left vacant and people had to apply. 10 shortlisted candidates were therefore set to start their interview today. The interview, which observed Covid19 protocols, started and the the first interviewee was Justice Chitembwe.

During the interview, Justice Chitembwe was asked about the corruption case which he was involved in. Before answering the question, he broke down. He however managed to gather himself and said that the case was meant to tarnish his name. 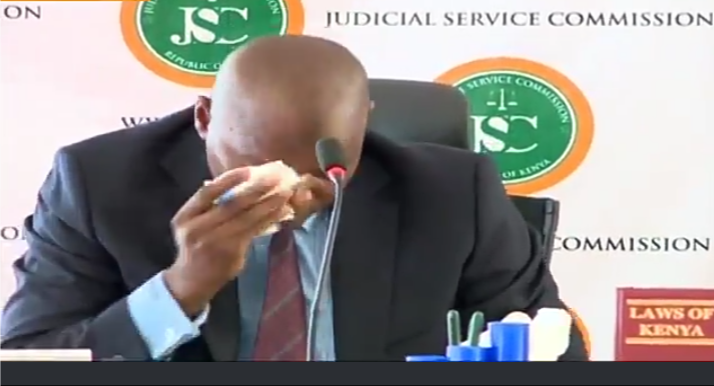 In the case, he was accused of having abused his offices between January and March 2008 when Chitembwe was NSSF corporation secretary before he was appointed judge.

The NSSF had decided to sell five plots between Laico Regency and Kenyatta Avenue to reduce its property portfolio and increase its liquidity. Delta Resources successfully bid for the purchase quoting Sh2.8 billion which was accepted. It paid 10 per cent of the price and the balance was deposited in an account opened by lawyers for both parties.

The sale however did not go through because it was established that some of the plots were smaller than indicated on titles and other documents.

DCI Issues Warning To Nairobians To Be Carefull with the Following

"Arrest Her", Netizens Call For Arrest Of Laikipia Women Rep After Drama At Her Boyfriend's Ex Lover's Place