Azimio Adds Another Person To The List Of Potential Running Mates For Raila. Denis Itumbi Angered

By HotKE (self media writer) | 1 month ago 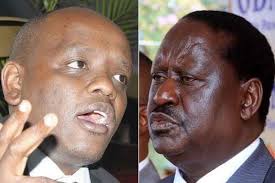 This was announced by Denis Itumbi, the former communications strategist for DP Ruto. He said that Azimio has done what was predicted a few days ago that they were going to do. Azimio has added CS Munya to the list of people they are considering as the running mate for Raila Odinga. This is after the coalition announced the CS had already been disqualified after he failed to resign in early February.

"So Azimio has done exactly what HNIB agents told you yesterday they would. They have added CS Munya to the shortlist. Kieleweke and ODM told us Munya is already disqualified by virtue of not resigning by the February deadline. Now let us hear, the next excuse.....," Itumbi said in a tweet.

Gachagua: I will recover my frozen money if we take power, use the money to build a nice fancy house

Sakaja at Odds Once Again, Fresh Petition Filed to Bar Printing of Ballot Papers Till Suit is Sorted

Martha Karua: Raila Odinga And I Will Rescue Our Nation As We Are In A Bad Place