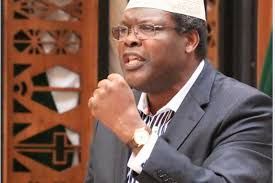 There have been rumours that the 2022 general elections may be shelved until 2023. It has been also claimed that Uhuru seeks to extend his term in office. Some of his close allies like Mutahi Ngunyi and Francis Atwoli have publicly declared that President Uhuru Kenyatta must run for another term before he retires from active politics.

On many occasions it has been stated that the electoral body is not ready to hold elections in 2022 and that there may be delays in conducting the elections. Today, the Sunday Standard Newspaper headline has caused an uproar among Ruto's vocal allies. The title that clearly stated why the 2022 polls may be delayed, forced Moses Kuria, Kipchumba Murkomen and Susan Kihika reacted bitterly. It said that the congested political calendar will force MPs deal with issues of the referendum, the demarcation of the proposed constituencies which are high political and delicate process. There will also be the reconstitution of the electoral body and all these issues threaten the conducting of the next year's elections. Kuria for example claimed that it is better for him to die as a matytr rather than seeing the postponing of the 2022 elections.

On the other hand Susan Kihika claimed that, as Kenyans we must resist and never allow an incumbent to even hallucite about extending his tenure. She added that it should not be allowed that anyone can reverse Kenyans democratic rights by attempting to do away with presidential term limits. She ended her remarks by telling Uhuru and his administration should just finish and go. Not even a second that can be added for him, she said. Miguna also made bold remarks by saying that he seconds her. 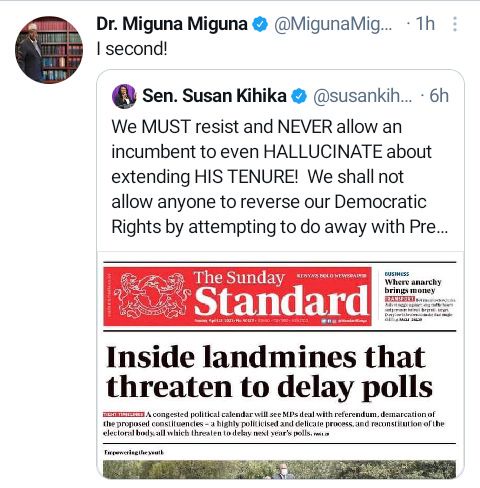