By Kimlen (self media writer) | 1 month ago

Juliana Whonge Cherera made headlines on August 15 when she and three other commissioners rejected the results of the presidential elections.

For two reasons, Cherera stood out from the other three commissioners. First, she is Chebukati's assistant, and second, she was the one who read the statement, "She will serve in this position for six years from the time she was appointed. 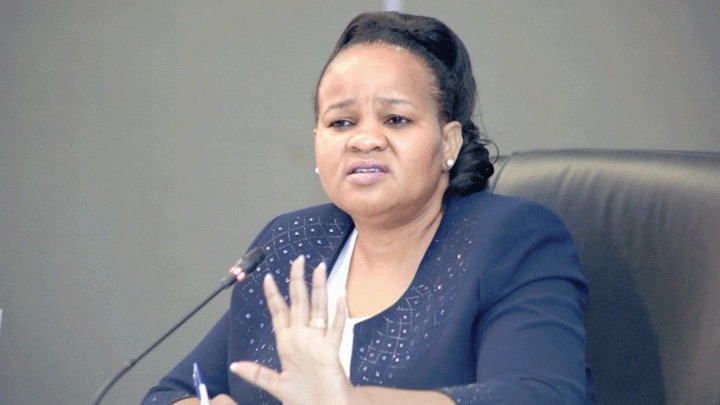 Juliana Whonge Cherera made headlines on August 15 when she led three other commissioners to reject the results of the August 9, 2022, presidential elections.

Cherera and the other commissioners, Irene Cherop, Justus Abonyo, and Francis Wanderi, said what they thought about the election results right before IEBC chair Wafula Chebukati made the announcement that Kenyans had been anxiously waiting for a few days.

On September 2, 2021, the above commissioners were sworn in to replace Roslyne Akombe, Consolata Nkatha, Margaret Mwachanya, Dr. Paul Kibiwott, and Roslyne Akombe, who all quit after the 2017 general elections.

Before their swearing-in ceremony, President Uhuru Kenyatta chose the four from a list of eight people who had been interviewed by a panel. The panel's job was to find the best people to fill the vacancies left by Akombe and her colleagues.

Cherera stood out from the other three commissioners for two reasons. First, she is Chebukati's deputy, and second, she was the one who read the statement that disowned William Ruto's election as president-elect.

She was a teacher before she got a job at IEBC. She has 18 years of experience in both education and management. She has also taught in schools.

Aside from that, she took courses in Early Childhood Development Education (ECDE) at KNEC, Strategic Leadership and Development Program at Kenya School of Government (KSG), and Senior Management Course (SMC) while she was still at KSG.

She later joined the Mombasa County government, which was led by Governor Ali Hassan Joho. As a Chief Officer (CO) in the strategic unit, she was in charge of the Governor's food distribution program and Secretary of the Mombasa County Economic Recovery and Legacy Strategy.

Cherera is thought to have been born and raised in Mombasa County. She has a net worth of $16.6 million, which comes from her 11 acres of land in Kwale, 1.5 acres in Kilifi, 2 acres of tea farm in Meru, and 1 acre of land in Mackinnon Market. She said this when she was being interviewed for the job of commissioner.

As an IEBC Commissioner, she gets at least Kshs621,250 a month. She will do it for 6 years from the time she was chosen for the job.

She is a mother, but we don't know much about her kids or if she is married.