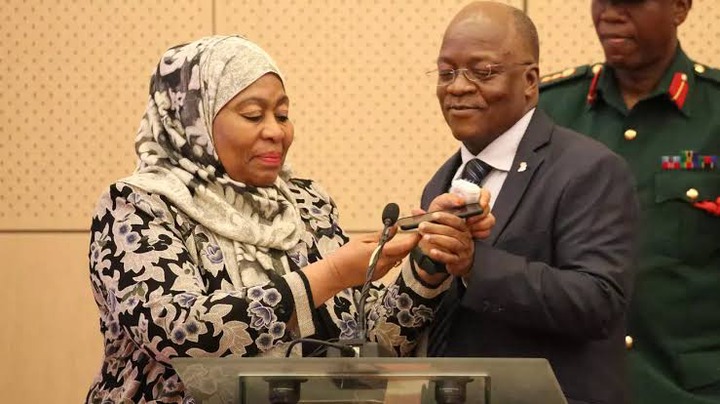 Samia Suluhu was the deputy president to the late President John Pombe Magufuli. However after the death of president John Magufuli, Samia was officially elevated as the president of Tanzania to lead the country for the remaining term of the late Magufuli who succumbed to heart related condition.

Samia Suluhu has been the president of Tanzania for sometime now and has really been at the forefront creating a united East African Society creating a solid relationship. She has focused more in ensuring Tanzania is in good relationship with it's neighbour's contrary to his predecessor.

Samia Suluhu has also come up with her own methodology of governance completely contrary to Magufuli. If you remember Magufuli believed their was no Covid-19 in Tanzania something Samia Suluhu disagree with after the death of her boss for the fact reason that she believes Tanzania is not an Island.

Samia Suluhu has also been traveling in different countries to seek bilateral and trade relations, something completely contrary with Magufuli. You remember the late President John Pombe Magufuli never bothered travelling in outside countries as he believed Tanzania can sustain itself without foreign masters.

Samia Suluhu has also respected the family of the late president John Magufuli especially the widow Janet Magufuli. She has also respected everybody irrespective their social status as well concentrated more on strengthening the government of Tanzania as well fighting corrupt and incompetence government officers really a step in the right direction.