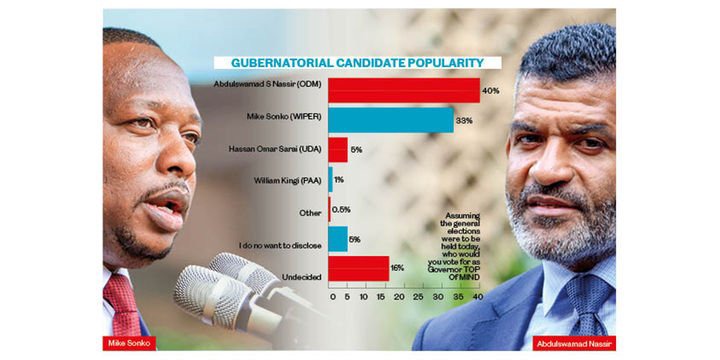 6According to a new poll, the Mombasa governorship contest is expected to be close, with Mvita MP Abdulswamad Nassir and Mr Mike Mbuvi Sonko separated by only seven percentage points.

Mr Nassir has a 40% approval rating, compared to 33% for newcomer Sonko, according to a Nation Media Group study conducted by Infotrak Research & Consulting. According to the poll, 16% of respondents are undecided, giving Mr Nassir and Mr Sonko plenty of room to increase their score.

Mr Nassir's popularity appears to be tied to that of the Orange Democratic Movement (ODM), which has 63 percent of the vote in Mombasa compared to Wiper's 23 percent. The poll also revealed that the two contenders were attracting voters from a wide range of political groups, with Mr Sonko receiving 63% of voters who did not identify with either the United Democratic Alliance (UDA) or the ODM.

Mombasa has been a staunch pro-ODM stronghold, with Wiper leading the charge after winning the Kisauni constituency seat in the 2017 election.

Former senator Hassan Omar is third with 5% of the vote, while William Kingi of the Pamoja African Alliance (PAA) is fourth with 1%. According to the poll, 5% of those who aren't sure who they favor, outside of the 16% who are undecided, declined to say who they support, a significant number that might swing the election any way, given the narrow margin between the two leading contenders. The remaining gubernatorial contenders shared 0.5 percent.

How Chelsea Could Line Up Next Season Without Antonio Rudiger

Here are 4 Biggest African Songs That Blew Up On TikTok