By Angel (self media writer) | 10 months ago 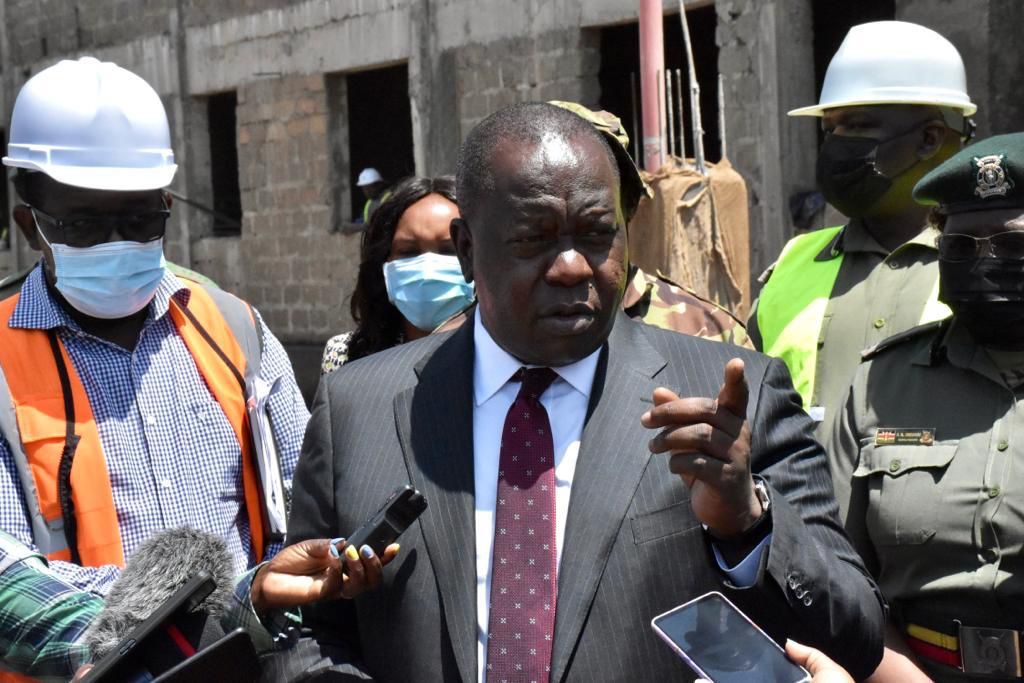 Interior CS Fred Matiang'i speaking after inspecting the progress of the construction of the Kenya Prisons Service Hospital at the Prisons Staff Training College (PSTC), Ruiru.

The Government has begun reclaiming prime land belonging to the Prisons department that has been grabbed by its senior officers over the years.

Interior Cabinet Secretary Dr Fred Matiangi said an audit of the land owned by the State Department for Correctional Services has implicated Ministers, PS and senior government officials in the theft.

He announced that the Ministry in consultation with the National Lands Commission will immediately embark on the process leading to the repossession of the land that was meant for the expansion of prisons facilities.

“When you look at the list of the people who have stolen that land, it reads who has been a Minister in charge of this department, a PS or a Commissioner General in the prisons service before. It is very shameful,” he said.

The CS lamented that the grabbing spree had been so extensive that in some prisons, whatever remained was a tiny fraction of the original allocation and cited Yatta, Eldoret and Kapsabet GK prisons as prime examples.

“I’ve just come from Yatta Prison in Machakos County. The facility has been reduced to 15 acres. The commandant was telling me that it feels like a student quarter. They are literally squatting on a land that essentially belongs to them!” he stated.

Other affected facilities include the Kapenguria GK Prison, Murang’a Juvenile Remand Home, and Mwea GK Prisons among others

To protect the remaining land from further grabbing, the CS said the government had launched

an “aggressive titling program” that will entail validation and collaborative land mapping in consultation with the NLC and the Ministry of Lands to provide prisons with valid and secure title deeds.

He was speaking after inspecting the progress of the construction of the Kenya Prisons Service Hospital at the Prisons Staff Training College (PSTC), Ruiru.

The Level Four hospital is one of four specialized hospitals for the disciplined services that arebeing constructed in the country in line with the Big 4 agenda investments in the health sector.

The other facilities are the Level 6 KDF hospital in Kabete, the National Police Referral Hospital in Mbagathi and the Border Police Training Campus in Kanyonyo hospital that is scheduled for completion next month and that will serve security officers and the neighbouring community.

“With that our capacity and provision of medical services to discipline forces will be unmatched in the region. In the next phase, we are looking at how can we use the capabilities that we have to expand the facilities and avail them to members of the public who live within the vicinity because that is how people who care about their country think.”

On pending bills accrued by the State Department for Correctional Services, Dr. Matiang’i noted that claims amounting to over Kshs. 3.4 billion have been settled, and that others worth Kshs. 980 are still outstanding due to lack of sufficient documentation by the claimants.

Audit queries had exposed some underlying critical issues, including but not limited to, lack of sufficient documentation to support services rendered, work done, and/or goods supplied as well as possible breaches of Article 227 of the Constitution of Kenya, 2010, and the Public Procurement and Asset Disposal Act.

He insisted that the Ministry will not bow to pressure from suppliers and other interest groups to pay without supporting documents saying that some of the procurements had been flagged out by the Ethics and Anti-Corruption Commission and the Directorate of Investigations.

The CS was accompanied by the PS, Correctional Services Safina Kwekwe and the Commissioner of Prisons, Brig (Rtd) John Warioba

Content created and supplied by: Angel (via Opera News )