Speculations Run Wild After Uhuru Sneaks to The Coast, Set to Meet Raila And Other Regional Leaders 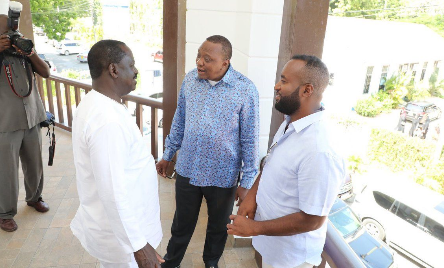 President Uhuru Kenyatta, Raila Odinga and Governor Hassan Joho during a past event/Courtesy

President Uhuru Kenyatta's succession politics is sending jitters to top leaders who are eyeing the post, with political experts predicting unexpected coalitions before 2022.

In what has stood out for the past couple of months, President Kenyatta as been giving the former Prime Minister Raila Odinga a 'upper hand' in his succession, owing to their recent political moves.

In a number of functions and occasions, the two former critics and now political brothers have been spotted together overseeing government projects and developments across different regions across the country.

According to a report by the Standard, the president silently left Nairobi yesterday for his planned visit to the Coast where he will launch and commission a number of projects in the six counties. 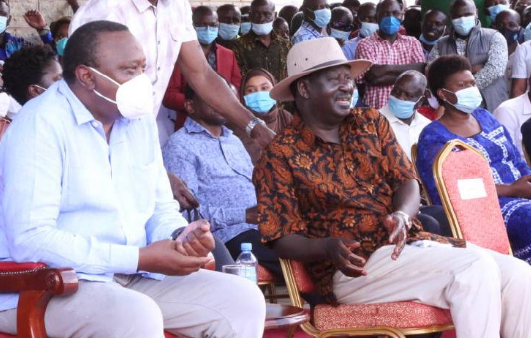 It is no doubt that Uhuru will be accompanied by Raila and his close allies who have already pitched their tents in the region, with BBI discussions being a day agenda.

Since Monday, Raila has toured Lamu and Kilifi Counties as he engages with the community leaders, in what has been termed as a counter-meeting to 'dilute' Ruto's influence in the region owing to his tour over the weekend.

Raila yesterday met with Cotu boss Francis Atwoli who has been in the fore front of calling for suspension of the 2022 elections in absence of BBI. 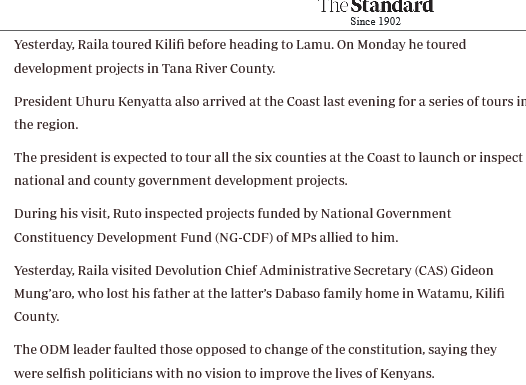