By Sam_kenya (self media writer) | 1 month ago

President Uhuru Kenyatta has left Kenyans in chants hours after his speech in Nakuru where he officially launched Nakuru as the forth city of the republic of Kenya. Uhuru who started by saying his time to speak about politics is yet, he has been charged by his words after he openly took a swipe at his deputy.

Kenyans have charged him following his words about the deputy president which he indirectly warned him of what may happen to him in the 2022 polls.

Though the head of the nation continued to urge kenyans to maintain peace and unity in the country. Uhuru leaked at the early his annoyance with the early campaigns and the political bid by the deputy president William Ruto. 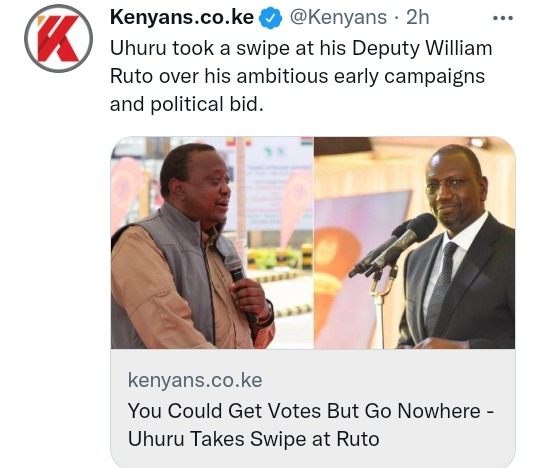 He also took his time to advice kenyan youths to be orderly and make their things without a hurry, he said that age has nothing to do with leadership and according to him even the aged can lead the country well as compared to the young ones.

"I urge the youth to reduce your pace, leadership is not a sprint, it's a marathon. The elderly will walk slowly and end up beating you."

President Uhuru Kenyatta added that kenyans are always excited when politicians come and promise them alot of things, but he insited that no matter what they get from them, peace must be prevailed in the country.

"I know you get excited when politicians come and promise you a lot of things, but know that at the end of it all, peace must prevail," Uhuru stated amidst cheer from the crowd.

The Head of State, while marking the historic day in Nakuru, pointed out that the day was a turning point. A section of kenyans has charged president Uhuru Kenyatta by his swipe to the second in command claiming that might be popularizing the former prime minister of the republic of Kenya Raila Odinga.