By LarryKatana (self meida writer) | 11 days 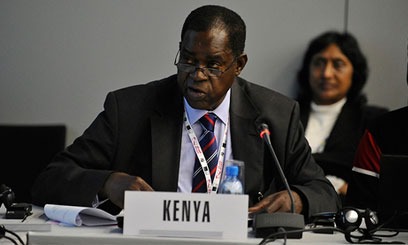 Philip Okundi made a name for himself during his days in the corporate world where he was at the helm of some of the most reputable institutions in the country in top management.

But his short stint in politics proved disastrous which culminated in his humiliating election defeat during the Homa Bay County Senatorial by-election in 2015. Since then, he has never recovered.

An electrical engineer by profession, Okundi went on to have a successful career in the public service where he served as the boss of some of the top parastatals in the country.

For nine years, between 1984 and 1993, Okundi served as Managing Director and Chief Executive Officer for the Kenya Ports Authority before moving to the Kenya Broadcasting Corporation in the same capacity where he served from 1993 to 1997.

He would later have another stint at the Kenya Bureau of Standards, serving between 1997 to 2001.

From 1977, Okundi served as the Chief Executive Officer for the Kenya Post and Telecommunication Corporation.

Having achieved much during his time in the corporate world, Okundi made a huge plunge into politics in 2002 where he contested the Rangwe MP seat on a Narc ticket and won.

However, his stint in Parliament was short lived as he was ousted in 2007 by Martin Otieno Ogindo.

In 2013, he attempted to make a political comeback but lost the Homa Bay Governor race to Cyprian Awiti.

Following the death of Homa Bay Senator Otieno Kajwang in 2014, Okundi joined the race to succeed him but lost to Moses Kajwang in the race for ODM party ticket.

He decamped to little- known Maendeleo Ushirikisho party but lost to Kajwang during the February 2015 mini-poll.

With just one year left to the next general election, it remains to be seen if the University of Essex- trained engineer still harbours political ambitions. If so, does he stand any chance to make political comeback!

Multibets To Place On This Friday 18th June For Great Bonus

The Man Of History: Cristiano Ronaldo Becomes The First Person To Hit 300M Followers On Instagram

Top Five Soccer Players With Most Goals In History Of Football