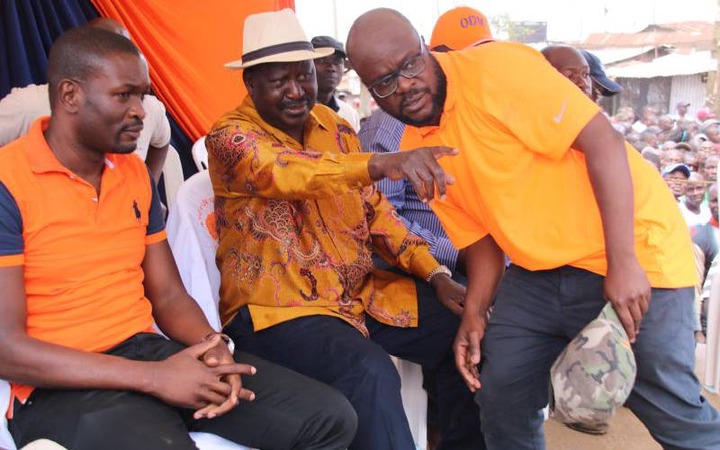 According to ODM party, one person has so far been arrested by the police for allegedly bribing voters in the ongoing Bonchari by-election.

ODM posted the video of the arrest revealing that the man, not identified, is one of Jubilee campaigners in the Bonchari mini-poll.

According to ODM, the man was caught by Homabay Nominated MCA Nereah Aketch and youths from ODM while allegedly dishing out money to the area residents.

In the video posted by ODM on their social media account, a woman is heard telling the police officers who were searching the man that the man has been dishing out money since morning.

As the police were searching the man who is cuffed, the police found reflector jackets in his pockets with names of different politicians as he pleaded with them saying he was not bribing anyone.

“This man in a rugged suite, one of Jubilee campaigners in Bonchari was nabbed dishing out money at a polling station in Riana Ward. Our nominated MCA in Homabay Hon. Nereah Aketch & our youths caught him red-handed with cash,” posted ODM. 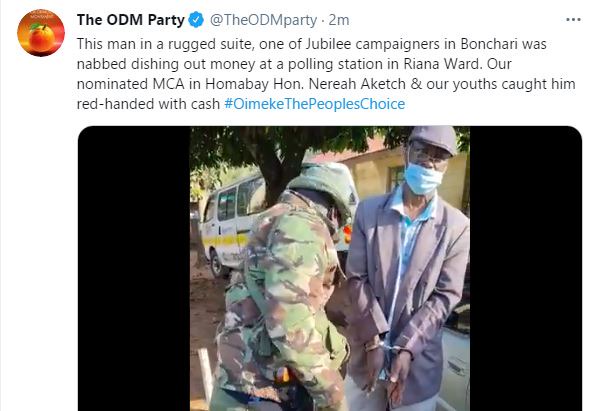 Raila Odinga-led ODM Party had earlier revealed that another group of Jubilee politicians were chased away by a group of ODM youths while trying to allegedly bribe voters.

“Our hawk-eyed youths have chased away Jubilee’s Jerusha Momanyi and Kiogoro MCA Apepo from Kerina polling station where they had gone to bribe voters. We encourage our youths and supporters to continue being vigilance to stop the STEAL,” posted ODM.

The Bonchari by-election has been marked by drama as the latest developments come barely hours after ODM party secretary general Edwin Sifuna claimed that some ballot boxes were being stuffed adding that there were torn ballot materials box.

Here is the video of the man being arrested posted by ODM party.

Ahmednasir: No Relevance For Degrees Uhuru, Ruto, Raila Have Degrees But Are Taking Us Thru Mud

SC Ahmednasir Remarks On Degree Requirement For MPs, MCAs Ahead of 2022 That Has Got Kenyans Talking