By Denis.news (self media writer) | 2 months ago 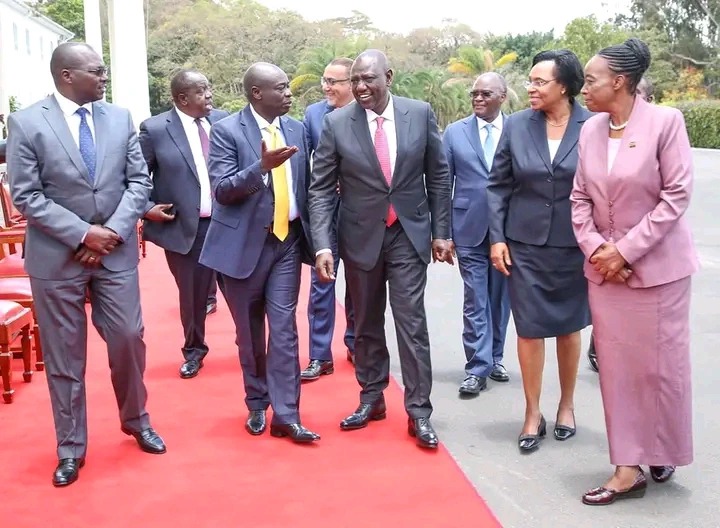 President William Ruto, the current Head of State, made the announcement of his Cabinet Secretaries only a few hours after meeting with those who had previously worked in Uhuru Kenyatta's administration.

The fact that several of his appointments already have issues pending in court has caused Kenyans to respond in a variety of ways to his newly formed cabinet. Mithika Linthuri and Aisha Jumwa are two of the new CSs that are now involved in legal matters.

Kenyans, on the other hand, have noticed that some of the most powerful figures from the UDA and Kenya Kwanza were not included in the new government. Some major names who were anticipated were Ndindi Nyoro, Hassan Omar, Mike Sonko, Wangui Ngirici, Josphat Nanok, Okoth Obado, Millicent Omanga, Cate Waruguru, Margaret Wanjiru, David Ndii, Isaac Mwaura, Najib Balala, Ahmednasir Abdulahi, Cleo Malala, Irungu Nyakera, and Dennis Itumbi.

There are a lot of rumours going around that Ruto wants to bring back the CAS posts so that he may reward his political supporters who lost their seats in the election. This is in spite of the highest courts declaring the posts to be unlawful and contrary to the constitution after they were established by former President Uhuru Kenyatta, who has since left office.

"Hatuendi Jamhuri Day, Tunaenda Jacaranda" Raila Odinga Reveals What They Will Do During Jamhuri Day