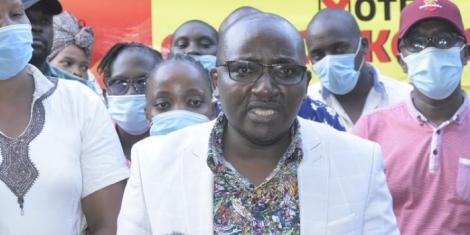 It is alleged that Koimburi attached fake documents with regards to his academic qualifications while submitting his declaration form to the Independent Electoral and Boundaries Commission who then forwarded the documents to the DCI to seek their authentication.

On March 15th, the DCI contacted the Registrar of Academic Affairs of JKUAT to inquire if indeed Koimburi was a graduate of the University. But to their dismay, the Registrar responded by saying that there existed no record of a certificate issued by the University to the said candidate.

On April 12th, the DCI dug further and wrote to KNEC about the C+ KCSE certificate that was presented by the candidate to IEBC, but they refuted the authenticity of the certificate. The Principal of Eekalakala Secondary School in Matuu, Machakos County where the candidate sat his KCSE, said that the documents were fake and even the index number that Koimburi said was his, belonged to another candidate at that time he sat his KCSE.

Koimburi risks being barred from vying for the May 18th Juja by-election if he is found guilty of the charges pressed against him. DCI detectives have said the aspirant is either in hiding or on the run since they have searched all of his premises and properties but they've not nabbed him.

"Ghost Anataka Ndege Ya Nini?" Ghost Mulee Mocked After He Sought For Help Being Stranded In India

CS Kagwe Risks Impeachment As Ole Kina Accuses Him of This