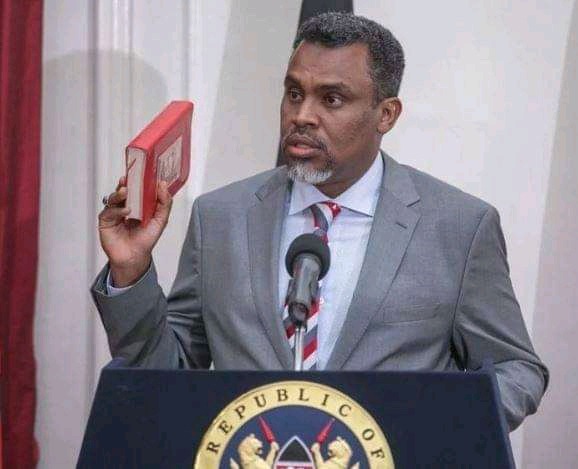 The DPP had a privileged upbringing thanks to his father Mohamed Yusuf Haji who was the Garissa Senator. The senior Haji was Kenya’s Minister of Defence from 2008 to 2013 and doubled as Minister of Internal Security and Provincial Affairs in 2012 in an acting capacity.

Yusuf served as a public administrator in the 70s and late 90s before he plunged into politics. Noordin’s mother was a teacher. The Garissa Senator rubbished claims that he had played a role in the appointment of his son as DPP.

He went on to say he feared for his son’s life given that his appointment would come with many enemies.

Interesting, Haji who is a Muslim, served as an altar boy when he was in a Catholic school in Nyahururu. He has however clarified that he remains a strict Muslim although he studied in Christian institutions.

The DPP is married and has children although he has kept them out of the public limelight.

After completing primary school, Haji joined Kabarak High School for his secondary studies and then went to Greensteds International School in Nakuru.

Mr. Noordin Haji holds an LLM and LLB from the University of Wales and Cardiff. He has an MNSPO (Masters's degree in National Security Policy) with merit from Australian National University. Also, he holds a post-graduate diploma from the Kenya School of law.

His first job in the Public Service was as a State Counsel at the Attorney General Office in 2000. His career has been shaped up in the Attorney General’s office, where he worked for many years as a deputy director of the National Intelligence Service (NIS). His responsibilities included providing legal counsel to the Inspector General of Police, the Director of Criminal Investigations, the Director-General NIS, and other Non-Law enforcement agencies.

After undergoing thorough scrutiny by the Public Service Commission (PSC) and vetting by the National Assembly, he was seen fit to hold the position of the DPP (Director of Public Prosecutions). Haji was then appointed later by the President of the Republic of Kenya as the Director of Public Prosecutions (DPP) in March 2018. He has worked tirelessly to improve coordination and enhance inter-agency collaboration in fighting crime.