"Uhuru's Unnecessary War With His Deputy Ha Made His Legacy To Go Up In smoke," Kithure Kindiki Says

By TabbsMaggie (self meida writer) | 18 days

Former Senate Majority Leader Hon. Kithure Kindiki has vehemently claimed that President Uhuru Kenyatta fight against his Deputy has made him lose his legacy. In a post he shared on his Facebook page, the Tharaka Nithi Senator said that President Uhuru Kenyatta dedicating his energy into fighting his Deputy has made him lose his legacy. According to the Former Deputy Speaker of the Senate Assembly the persecution against the second in command has made him more influencial than before. The Senator has already said that the persecution has made William Ruto get more than two millions votes. Kindiki says that despite Uhuru losing nothing in the fight against his Deputy, it is his legacy that has gone up in smoke. 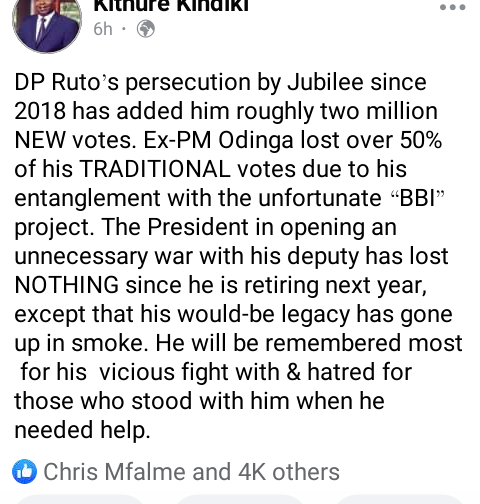 "DP Ruto's persecution by Jubilee since 2018 has added him roughly 2 new millions votes. Ex_PM Odinga has lost over 50% of his traditional votes due to his entanglement with the BBI project. The project in opening unnecessary war with his Deputy has lost nothing since he is retiring next year, except that his would be legacy has gone up in smoke. He will be remembered most for his vicious fight with and hatred for those who stood with him when he needed help," said Kithure Kindiki. 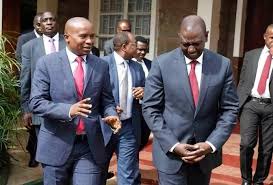 Worshiping Satan In Public? The World Is Experiencing End Times

He Was a Loving and Caring Husband, Slain Officers' Wives Break Into Tears at His Burial

Rigathi Gachagua to Remain in Custody Till Monday

Ruto: My Political Rivals Are Unhappy Because Of Me Associating With Hustlers And Helping Them

Clergy: Let's Respect The Decision Of Kenyans On Who They Want To Elect, It's Their Right