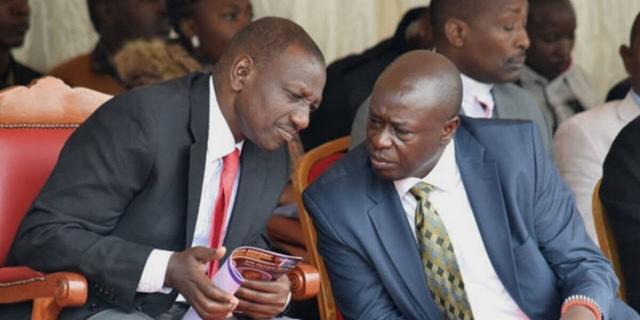 Less than a week after Deputy President William Ruto unveiled his running mate, Mathira member of parliament Rigathi Gachagua, some leaders from Mt Kenya who were opposing his appointment have announced their next move.

The reports that surfaced hours before Gachagua was chosen was that he was left in the list alongside Tharaka Nithi Senator Professor Kithure Kindiki who was supported by most UDA MPs from Mr Kenya.

Speaking with the Standard on condition of anonymity, one of the UDA leaders said that most those who were preferring Kindiki will take a back seat in the presidential campaign, and will be focusing on their own campaigns.

The leaders argued that they needed a 'soft leader,' who is reconcilatory, and that's why they drummed up support to Kindiki, compared to Gachagua who has been reported to be abrasive, decisive, very eloquent, and a person who can move crowds to his side.

Despite losing the post, Kindiki who served as a deputy speaker of the Senate announced that he will be loyal to the UDA party as well as the Kenya Kwanza Alliance, and would be helping the party where need be, further expressing his confidence that they will be winning in the August polls.

He dismissed Martha Karua's appointment as Raila Odinga's running mate, saying that she will not be able to undo Ruto's gains in Mt Kenya Region within the next three months.

With reports surfacing hours after Gachagua's unveiling that Kindiki would be considered for the Attorney General's slot in Ruto's government, Kindiki said that he was not available for an appointive post, and will be taking a break from politics after August 9.