By Felixotoro (self media writer) | 8 months ago

Building Bridges Initiative (BBI) bill is no longer available following the Court of Appeal ruling last Friday that the bill was unconstitutional, null and void. A bench of seven judges led by Justice Daniel Musinga upheld the High court ruling against the bill.

The proponents of the bill that was seeking to amend the new constitution of Kenya of 2010 were president Uhuru Kenyatta and Odm leader Raila Odinga who mutually agreed to work together through the famous handshake after a heatly contested presidential race in 2017. 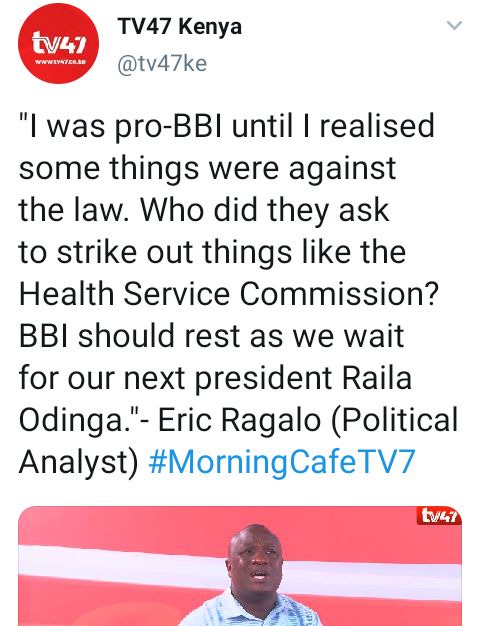 A prominent political analyst called Eric Ragalo said that initially he was a pro-BBI but later shifted his support after he realized that some acts were against the law such as scrapping off Health Service Commission (HSC). Mr. Ragalo supported the Court of Appeal ruling against the BBI bill but he added on saying ODM leader Raila Amollo Odinga will be next president of the republic of Kenya.

In conclusion, the political analyst made the sentiments during a live interview with a local television station known as TV 47 this morning.

Why Senator Gideon And Hon. Kalonzo Have Kept Quite About Matters Of Azimio La Umoja.