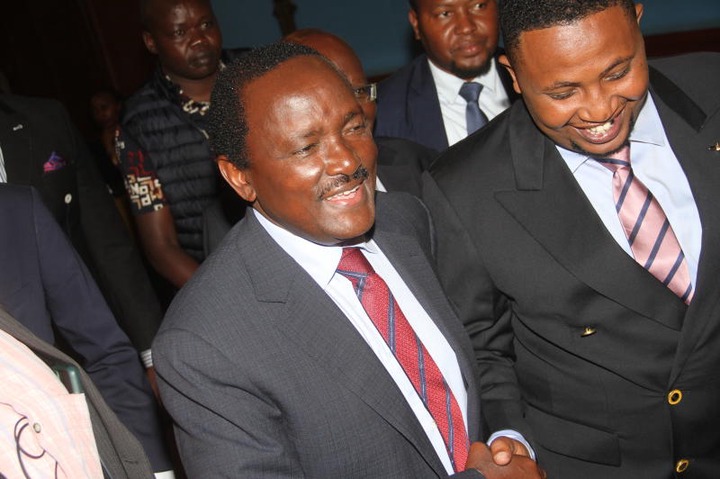 If Kalonzo Musyoka returns to Azimio la Umoja One Kenya Alliance, he will be given the position of National Assembly Speaker, this is according to Jubilee Vice Chairman David Murathe.

Murathe, while speaking to NTV, says that the position of Chief Minister is not anchored in the constitution, hence Kalonzo Musyoka will be given the Speaker, which the constitution recognizes.

"The chief minister post is not in the constitution, it is what BBI wanted to create. And Kalonzo can come back and take the Speaker of the National Assembly, which is recognized by the constitution," Murathe said.

Murathe's remarks were sparked off by Kalonzo Musyoka's allies that the position of Chief Minister is not in the constitution, hence Kalonzo cannot take it.

Murathe also said that it will be so good to have Kalonzo Musyoka on Azimio la Umoja team.

"It would be nice to have Kalonzo in Azimio, since that would indicate that Ukambani votes are secured for the block, given that Ngilu and Kivutha are already in, along with the majority of the lower eastern leadership," Murathe said.

The Jubilee vice chair added, however, that there is communication among Azimio principals that they will permit the Wiper leader to run for president if he so chooses.

"I believe Kalonzo is staying freely in Azimio. He is not being compelled. I am also aware that Azimio's principals have agreed in principle that they will not object if he decides to run for president on the Wiper ticket," Murathe explained.

During the interview, Murathe stated that if Kalonzo ran for the presidency in the August 9 General Election, he would not win.

"Kalonzo cannot possibly win this election on his own, you need more than just your turf," he remarked.