"Nani Amechukua Mask Yangu?", President Uhuru Cries Out As His Mask Dissappears After His Speech

There was a little bit of drama after the speech delivered today by the president of Kenya, honorable Uhuru Muigai Kenyatta where he gave several directives and restrictions on a move that he claimed is meant to reduce the number of Covid-19 infections in Kenya.

However after delivering his speech, the president is reported to have lost his face mask which he had brought along with him at the stage where he addressed Kenyans on Covid-19 prevention measures.

In a video that has since gone viral all over the internet and is still making rounds on different social media platforms, the president along with several other ministers could be seen trying to help the president look for his face mask where he goes ahead and asked who had stolen his mask.

However, he later finds the mask under the stage after the minister of Interior, Dr Fred Matiangi shows him where the mask was stopping all the dramatic scenes that had begun after the president's speech.

The President's Covid-19 prevention measures remarks has however sparked alot of mixed reactions from Kenyans who seemed to have different opinions and suggestions on the matter. With a section of Kenyans claiming that this was the best way to deal with Covid-19 infections, others went ahead and called out the president for not considering the lives of people who earn below average.

According to alot of Kenyans who took to social media accounts to express their suggestions, they claimed that the president should have found an alternative solution to deal this situation adding that alot of Kenyans were going to suffer. 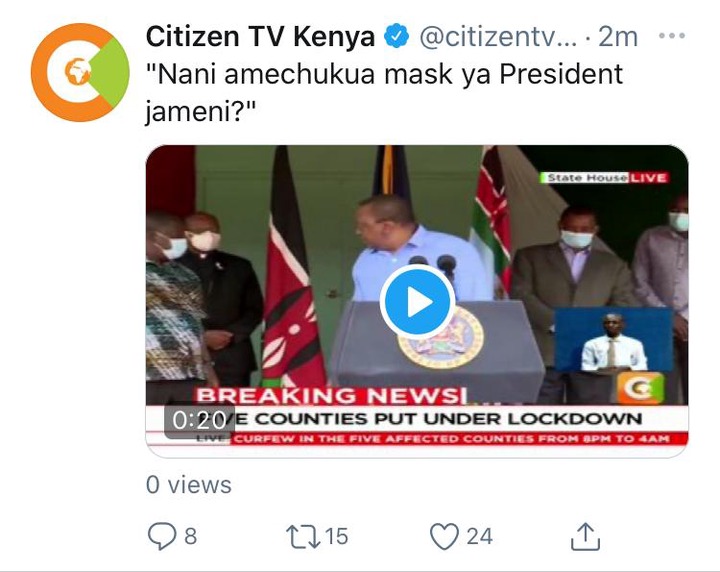 Prof. Makau Mutua Predicts What Might Happen To Oparanya Ahead of 2022 Election

PLO Lumumba Breaks His Silence On The JSC Interviews

"Ruto Is Not What We Thought He Was, He is Now Deflated," Manyora Claims Ruto is No longer Confident