By Fanfair.co.ke (self media writer) | 1 year ago 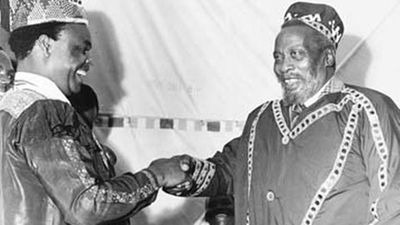 Politics in Ukambani is about to get into a new perspective as the fallout between former Machakos senator, Muthama and former vice president,Kalonzo Musyoka evidently came out at the burial ceremony of Mulu Mutisya son in his matrimonial home.The Mulu Mutisya family has for a long time been in control of power and politics in the region ever since Kenya attained independence.

The burial ceremony of Mulu Mutisya son was a reminder to the people of Ukambani of their strong leader that existed during Jomo Kenyatta and Moi era.Mulu Mutisya was not educated but was brilliant enough to be Kenyatta foreman and most trusted Ukambani leader from the region by Moi.

Kalonzo Musyoka was also for a long time Mulu Mutisya ally while David Musila, who lost the Kitui governorship to Charity Ngilu was at one time at crossroads with Mulu Mutisya for almost challenging his leadership position in the region by being so actively involved in development agendas in the region while he was the permanent secretary in Central Kenya by initiating development projects in Mwingi which also included the Mwingi mission hospital.

The split between David Musila and Mulu Mutisya almost cost Musila his life as Mulu Mutisya through his connections with state house wanted Musila to be transferred to Northern Kenya where insecurity was so high and previous leaders had lost there lives while at duty.During Mulu Mutisya burial in 2004 while he was 84 years old some of the leaders present included former president Moi,former president Kibaki and also former vice president Kalonzo Musyoka with many more present for the occasion.

Fast forward to Mulu Mutisya son burial,the political supremacy seems to have moved to between Kalonzo Musyoka and former Machakos senator, Muthama.During the burial, Kalonzo blamed Muthama for the political intruce that led to the downfall of the region in political dominance in the country where Muthama was key in forming a pact between Wiper and ODM party.

Muthama now believes that Ukambani people should rally behind Ruto as he leads them to political success while Kalonzo at the burial press statement stated that he shall not be part to any political brokerage by Muthama as they both head different ways.Kalonzo also said that he will still be in the ballot come next election.

Content created and supplied by: Fanfair.co.ke (via Opera News )

5 Relationship Destroyers And What To Do About Them