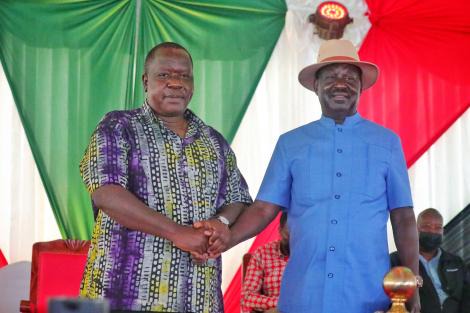 Just recently, Raila Odinga was given another big boost on his road to presidency. That is because in a high profile meeting that was attended by top leaders like Eugene Wamalwa, Mutahi Kagwe, Fred Matiang'i, Richard Onyonka among others, many of them agreed to support him for the presidential seat.

Many of those top leaders like the host Fred Matiang'i never supported Raila Odinga in the last general election and for that reason, it is a big boost to Baba's side after they agreed to work together. That is something that caused celebrations in Raila's camp but as we are speaking, those celebrations have been cut short after one of the former Prime Minister's allies known as Ledama Olekina came out to give Matiang'i a big blow.

Through his official twitter account, the Narok senator gave Fred Matiang'i a bombshell as he criticized the move to build a 1200 bed capacity dormitory. According to Ledama, that's too dangerous to the learners.

"Are you serious ? How can you house 1200 students in the same building ? This Chinese influence is becoming too much! (Crowded Kisii Dorm) I may not support your ways of doing it but I fully support education." Tweeted Ledama Olekina.