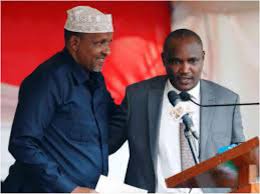 Adan Duale and John Mbadi in a past function.

The fallout between president Uhuru Kenyatta and his deputy William Ruto went a notch higher when the president hosted NASA leaders at Mombasa on Tuesday.

Explaining the Genesis of bad blood between the famous dynamic duo, Leader of minority john Mbadi said that the DP's failure to tame his Leutenants from abusing the president might have led to the fallout.

Mbadi was speaking during a talk show on citizen TV where he was hosted together with former leader of Majority Adan Duale.

On his side however, Adan Duale differed with Mbadi saying that what happens in jubilee is because there is freedom of speech whereby people can speak freely.

On the contrary, Duale said that ODM is like a cult where if one differs with Raila his goose is cooked.

Duale hailed the freedom found in jubilee that allows members to air their issues without fear of reprisals.

This he said can't happen in ODM where the party leader is like a Catholic pope who can't be Criticized by anyone.

He added that this is the reason why he left the party to join United Republican party (URP) under William Ruto.

He however comended the party for being the oldest in the country having been formed over ten years ago.

In a quick rejoinder, ODM chairman John Mbadi dismissed the claims hilariously saying that if the party were a cult, Duale and all those who left would have died by now.

This is happening at a time when Kilifi governor Amason kingi has already welcomed his Ouster from the party leadership for allegedly going against Raila Odinga.

Do you think ODM is like a cult? Feel free to share your thoughts and comments on this on our comments platform.