I Swear To You Ruto Will Not Be President You Will See Mark My Words; Atwoli Spells Doom For DP Ruto 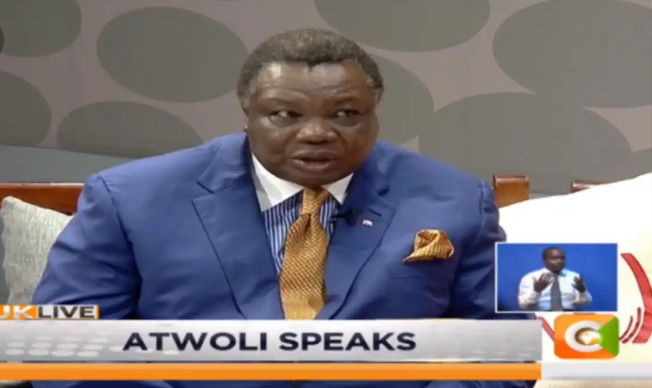 Central Organisation of Trade Unions Secretary General Francis Atwoli came within inches of taking a deadly and portent Luhya oath known as “Khwesisa oluotosi” as he shot up on his feet in the middle of an interview in a dramatic moment captured live on air, and which startled his host.

He swore that come hell or high water, Deputy President William Ruto will not be the President after next year’s poll. Although he has said this in the past, this instance appeared more pronounced.

Not entertaining any doubts in his declaration, Atwoli said he was a Kenyan and would be going nowhere, so people are free to question him in case his words didn’t come true.

The unbelievable incident took place last evening during Citizen TV’s episode of the weekly popular show Jeff Koinange Live which was hosted by Jeff Koinange himself.

Speaking with a high level of certainty that appeared to informed by some unknown guarantee, Francis Atwoli pegged on it everything that is important to him that the Deputy President, William Ruto, would not be the president after next year’s poll.

Interestingly, however, this time, he introduced two new riders. He said that Ruto was not going to be president as long as the election is free and fair. He also appeared to have slightly changed tune from his earlier hard-liner stance, now saying that in deed, at some point in the future, Deputy President William Ruto may actually manage to be president. However, he maintained that this won’t be happening in next year’s election.

In the past, the fiery trade unionist who holds the continental leadership role of the trade union outfit had said that Ruto was never ever going to be the president of Kenya.

It will be remembered that in the heated atmosphere, in the aftermath of the controversial handshake between president Uhuru Kenyatta and Orange Democratic Movement party leader Raila Odinga, Francis Atwoli went as far as declaring that the DP wouldn’t be on the ballot.

This sparked outcry from Dr. Ruto’s camp, with claims that the statement was reckless and cast doubt on the safety of the DP’s life. This forced Atwoli to clarify his statement.