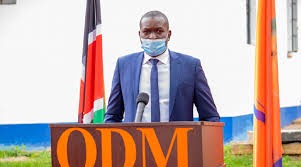 There have been an ongoing debate on who should carry the flag of OKA in the coming general elections if they decide to stick together till the end, Orange Democratic Movement Secretary General Edwin Sifuna has also contributed to the debate backing Wiper party leader Kalonzo Musyoka to carry the flag of One Kenya Alliance over Musalia Mudavadi.

Talking today January 18, Edwin stated that there is no single formula that puts Musalia Mudavadi over Kalonzo Musioka in the alliance, considering the number of legislatures allied to the various OKA principals, Kalonzo Musyoka comes first with 23 members of Parliament in his Wiper Democratic Movement Kenya followed by Musalia Mudavadi who has 14 members of Parliament under his Amani National Congress closely followed by Moses Wetangula with 13 legislatures under his Forum for Reforms and Democracy Kenya, Gideon Moi comes fourth with 10 legislatures under his Kenya African National Union.

"You can even go and throw dice with witch doctors, they will still show you that Kalonzo is a stronger person in terms of numbers than Musalia Mudavadi." Sifuna concluded.