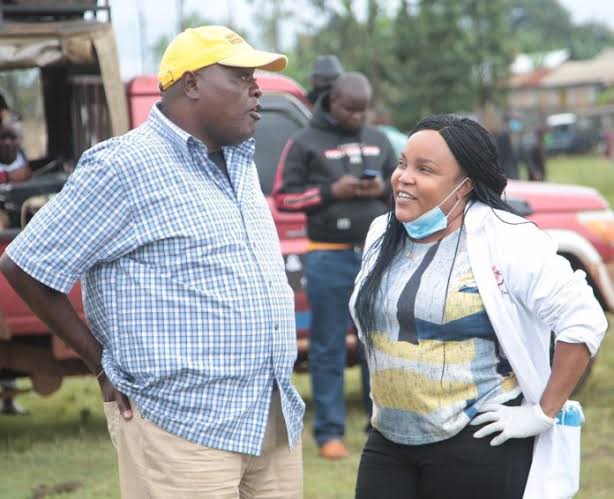 Kirinyaga county MP Purity Ngirici and her husband who are alleged to be the owners of Mount Kenya TV. Photo/Courtesy

Kenyans have elicited mixed reactions after the government through the Communications Authority of Kenya ordered Mt Kenya TV to shut down for violating broadcast regulations by airing inappropriate content.

It has been alleged that the television station is owned by deputy president William Ruto's ally who is also a woman representative from one of Mount Kenya counties.

CAK directed the station to go off air from midday Wednesday, April 28 for a minimum period of four weeks. The station will only be allowed to go back on air after it has complied with all compliance issues.

Mount Kenya Television acknowledged the violations, pleading that they had pulled down the offensive content immediately after noting the context mix up in its kids programme – Mucii wa Ciiana’ (which means Home for Children).

The station also indicated it had apologized on air and its social media pages, and instituted internal disciplinary action against suspected staff. Mt Kenya attributed the violation to the ongoing staff changes and to possible sabotage.

"They are even supposed to shut down some kikuyu stations.. they are soo many some with very poor audio and graphics contents."Gabriel

"Now how do you shut down a whole Tv station because of a single director Who didn't do a thing right?they should have fired and fined the director ....ino kenya ma ni wana mutheri"Sony

"Thanks to CA i have now watched the animation that made them to slap the fine 'free Jimmy' ata sikuwa naijua.so on the other hand wanaipromote pia."Ngatia-

"As you are busy updating old recycl news, Denis Itumbi can tell what will happen in the next 3days, that is how exhausted and retarded this ODM Raila orphans are, they get fed on leftovers."John

"Wanyonge hatuna haki!!!!There is a government vehicle (GKB 415U), belonging to Nyamira County that is being misused by a civilian known as Evelyn Oguri (a daughter to Esther Nyaboke Oguri) to transport building materials and goons to Mosiabano Kijauri within Nyamira county to forcefully build on someone’s land illegally. The property or land under question has a court order and a letter from the lands commission barring her from developing any structure until the court process is completed to determine the rightful owner of the land. However, since this lady has connections with the Nyamira County policemen and other government officials in the county, she is neither ready to abide by the court order and the letter sent to her by the lands commission. Let it be known by the DCI and the interior cabinet Secretary that some government officials are misusing their position in county administration to offer to illegal services and police escort. We cannot watch this happening. Let this go viral.John "

"Now how do you shut down a whole Tv station because of a single director Who didn't do a thing right?they should have fired and fined the director ....ino kenya ma ni wana mutheri"John

"We Love You As A Comedian, Not A Politician"-Kenyans tell Jalang'o As He Joins Race For Lang'ata MP

How To Get A Guy Kiss You