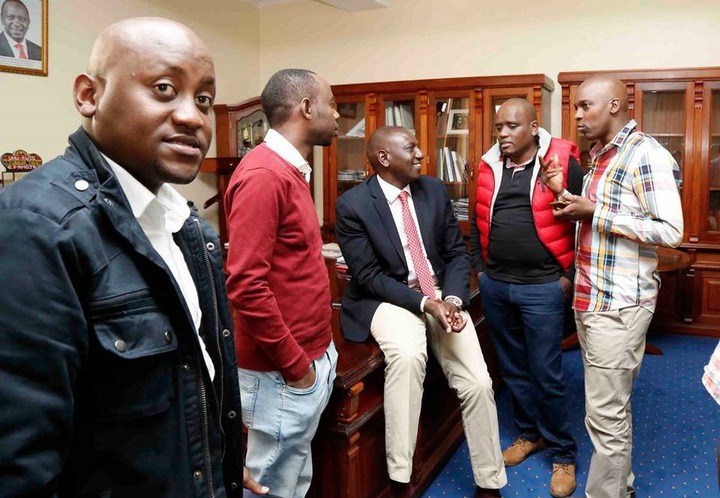 Photo: Dennis Itumbi speaking with William Ruto in the past. (Image/file)

With the 2022 presidential elections coming near, the country is experiencing a surge in political activities. Ranging from the lowest electable positions to the highest, the former leaders, first-time politicians and those currently holding elective positions are busy convincing their electorates to favour them over their opponents.

For the presidential seats, different politicians have shown interest to succeed President Uhuru Kenyatta since the current constitution does not allow him to contest anymore. While the final outcome might be different, two politicians seem to be the front runners —Raila Odinga and William Ruto. The duo has intensified their campaigns across the country with the efforts of getting more support and assuring their already decided supporters.

While the DP — William Ruto is popularizing his bottom-up approach in the coastal regions of Lamu counties and other places, the former prime minister today headed to Meru county. In some of the places Raila Odinga visited, he received a warm reception. But based on the video clips going round on social media, the former prime minister met a cold reception from the crowd in Meru who chanted Ruto and hustler narratives to disrupt Raila Odinga's message to residents.

Consequently, William Ruto's close ally and the former State House strategist has sent a strong message to UDA supporters and all other Kenyans. In his message, he advised Kenyans not to heckle leaders they dislike but instead allow everyone to sell their own ideas.

"Let everyone sell their ideas.. No need to heckle or shout anyone down.. A battle of ideas, vision and clarity.. Spontaneous or organised, it is completely unnecessary.. It happened during BBI, in Kieni also & today in various towns. That is my strong view..." wrote Dennis Itumbi.

His message appeared to have been seemingly matched to today's events in Meru, and which different political pundits have interpreted the crowd differently. To some, they think the crowd was sponsored to disrupt Raila's event in Meru but others believe otherwise. What do you think? Kindly share with us your views in the comments section below.

Race to succeed Gov. Kingi takes shape in Kilifi as battle lines have been drawn.