By Alganonkadi (self meida writer) | 29 days 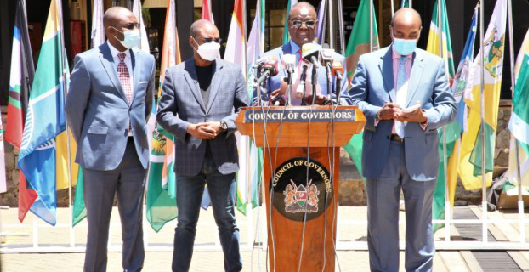 The Council of Governors (COG) is in a new push to revive the Building Bridges Initiative (BBI) after the Court of Appeal declared it unconstitutional, null and void.

Through their Legal and Constitutional Affairs Committee, the governors announced that they would be seeking parliamentary amendments to increase revenue allocation to the counties through a sponsored Bill.

While addressing the media, Meru Governor Kiraitu Murungi, stated that the sponsored Bill will amend article 256 of the constitution through parliament as it does not require the amendments to go through a referendum.

He stated that the amendments proposed by the BBI would have been beneficial to the county governments hence their new push to have the amendments sail through.

In addition to the amendments, the governors state that they would include nine BBI clauses that touch on county governments’ revenue.

The clauses the governors intend to include in their sponsored Bill touch on the equitable sharing of revenue, equalization fund, county assembly fund, ward development fund, constituencies development fund, HELB loan repayment, and the seven-year tax break for small enterprises.

The governors further stated that they were rooting for these amendments and criticised the court of Appeal for focusing on procedural issues rather than the substantive issues in the BBI.

“The council is of the position that the judgement made on Friday 20th August 2021, did not consider the substantive issues contained in the constitution amendment Bill.”

“The court’s decision largely focused on the procedural aspects of a constitutional amendment process,” Kiraitu noted.

He further called on political leaders across the political divide to support the amendments the governors are proposing.

The chairman added that his committee will reach out to the Legal Affairs Committee of the National Assembly to ensure that the amendments are passed before the 2022 General election.

“This is the moment to test the political will and genuineness of the political class, especially those that were supporting the BBI should support the COG sponsored Bill,” Kiraitu stated.

Moses Reveals Secret Deals Between Uhuru and Ruto Since 2013